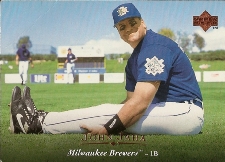 John Jaha was a talented player whose career was often derailed by injuries. He played ten seasons in the major leagues, all with the Milwaukee Brewers and the Oakland Athletics.

On September 11, 1992, in his rookie season, Jaha stole four bases in a game against the Baltimore Orioles, tying the Brewer record for most stolen bases by a player in a game. Jaha showed a good deal of prowess as a base stealer early in his career - especially for a first baseman.

He was mostly a first baseman in the majors, but played about one third of his games at DH.

Lifetime in the minors, he put up numbers of .297/.426/.513. In the majors, he might have posted numbers as high if he had not suffered so many injuries. Even so, he drew many walks and had good power.

There is an interesting comparison, based on similarity scores. The second-most similar player to Jaha is slugger Jim Gentile from the 1960s. The most similar player is listed as Dale Long, but while the career totals may be similar, the shape of Long's career was different than that of Jaha.