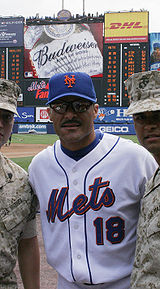 José Valentin played sixteen years in the majors, mostly as a shortstop and third baseman. In his five years with the Chicago White Sox, he hit at least 25 home runs each year. Early in his career, José was less prominent a player than John Valentin, who broke in the same year, but José outlasted John.

José Valentin spent the first eight years of his career with the Milwaukee Brewers. He typically had a low batting average with a good walk percentage and moderate power. His peak in home runs was 24 in 1996.

Traded to the White Sox, he showed good power with them, slugging at least .463 each year in spite of low batting averages. His peak was 30 home runs in 2004 when he hit .216. In his first post-season appearance, he hit .300 in the 2000 Division Series. At age 30 in 2000, José was one of the older regulars on a White Sox team that featured many up-and-coming stars such as Paul Konerko, Magglio Ordonez, Carlos Lee and Mark Buehrle. That year, he hit for the cycle against the Baltimore Orioles on April 27th. No White Sox player would perform the feat again until José Abreu in 2017.

After he hit only .216 in 2004 (an average which had dropped each year since 2000), his career was in doubt, but he caught on with the Los Angeles Dodgers as a back-up. He hit only .170 with them, and his career was again in doubt, but in 2006 he was still playing in the majors - this time with the New York Mets, who won their division. He played in both the Division Series and NLCS that year, going hitless in nine at bats in the first, and 6 for 24 in the second as the Mets fell to the St. Louis Cardinals in seven games. José slugged .491 in 2006, so he survived to play again the next year with the Mets. He started the year as the team's regular second baseman, but his season was cut short when he fouled a ball off his left leg on July 20th, breaking a bone. He then played briefly in the minors in 2008.

Based on similarity scores, the most similar player is a Hall of Famer Joe Gordon, who also had good power, drew lots of walks and played a key defensive position. The next two players on the list, Doug DeCinces and Rico Petrocelli, both infielders who hit for power but with low batting averages and struck out a lot, are better comparisons, as no one ever mistook Valentin for a future member of Cooperstown.

José is the brother of Javier Valentin. His son Jesmuel Valentin was drafted in the supplemental 1st round of the 2012 amateur draft and reached the majors in 2018.

Valentin is also owner of the Atenienses de Manatí, for whom he is the captain and a player as well. He was the manager of the Fort Wayne TinCaps in 2012-2013. He was the first base coach of the San Diego Padres in 2014 and 2015.