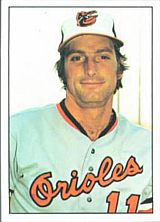 Doug DeCinces was a third baseman with good range who was unfortunately cursed with following Brooks Robinson at third base with the Baltimore Orioles. Still, DeCinces went on to have a fine career. He hit 237 home runs over 15 years and was on the All-Star team in 1983. His career OPS was 56 points above league average.

A California boy, who was born in Burbank, CA, Doug went to Monroe High School and attended Pierce College. He spent six seasons of his major league career with the California Angels. While at Pierce College in 1969 and 1970. DeCinces earned All-Star Conference honors twice.

A third-round pick in the secondary phase of the January 1970 amateur draft by the Orioles, he was mostly in the minors from 1970 to 1974. He never hit .300 at any stop, but hit 19 homers with the Rochester Red Wings in the AAA International League in 1973.

His most impressive year with the Orioles came in 1978, when he smoked 37 doubles and 28 home runs.

In Baltimore, DeCinces is perhaps most fondly remembered for his home run on June 22, 1979 in a comeback victory against the Detroit Tigers, which many cite as the birth of "Orioles Magic." Later in 1979, he played against the Pittsburgh Pirates in his lone World Series appearance, where he batted sometimes fifth and sometimes sixth in the lineup, which included Eddie Murray. DeCinces hit a home run in the first game of the Series. 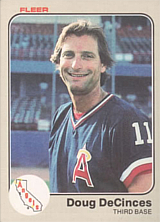 For reasons that now appear to make little sense, DeCinces was traded to the Angels in January of 1982 for "Disco" Dan Ford. He responded by posting his best season with career highs including 42 doubles, 5 triples, 30 home runs, 97 RBI, a .301 batting average, and a .916 OPS. Doug played in the ALCS that year, going 6 for 19 with a pair of doubles as the Angels fell to the Milwaukee Brewers in 5 games after winning the first two contests.

DeCinces was enjoying what could have been an even finer season in 1983 until losing nearly two months of the season to injury. Before landing on the disabled list in late June, he was hitting .315 with 15 home runs and a .951 OPS through 61 games. Once back in the lineup, he responded with a modest 6-game hitting streak, but suffered a disastrous September, ending with a respectable season output of 18 home runs and a .822 OPS. His injury and inability to recover mirrored the team's fortunes, as they were in first place in late June, but finished the season 29 games behind the AL West Champion "Winning Ugly" Chicago White Sox. Considering that DeCinces traditionally performed his best in July and August and his second half career OPS was 50 points above his first half mark, it only adds further to the "what if" speculation for his 1983 season. Had the Angels remained in 1st place, DeCinces would have faced his former team, the Orioles, in the 1983 ALCS.

In Game 4 of 1986 ALCS, DeCinces hit what is likely his best-known home run on national television. Roger Clemens had scattered 5 hits over 8 shutout innings, when DeCinces led off the 9th inning with a long home run well over the left-center wall of Anaheim Stadium. The Angels went on to win the game, 4-3, in 10 innings, but would lose the series to the Boston Red Sox in 7 games, after an epic collapse in the 9th inning of Game 5.

He was signed by the St. Louis Cardinals late in the 1987 season and played his last 4 major league games with them. He was not eligible to play with them in the postseason, having being added to the team after the final date for setting postseason rosters. Given that journeyman Tom Lawless started a few times at third base in the Cards' run to the 7th game of the 1987 World Series, it's possible DeCinces could have given them a useful boost, having hit 23 doubles and 16 homers as the Angels' starting third baseman in 1987. He played for the Yakult Swallows in 1988, then retired.

Based on the similarity scores method, the most similar third basemen to DeCinces include such names as Puddin' Head Jones, Ken Caminiti, Ken Keltner, and Howard Johnson. He was named to the Angels All Time Team in 2000 and inducted into the Baltimore Orioles Hall of Fame in 2006.

He founded and sponsors the Doug DeCinces March of Dimes Celebrity Golf Tournament. He ran a real estate firm and developed the Strawberry Farms Golf Course in Irvine, CA. In 2012, he was the focus of an investigation by the Securities and Exchange Commission that led to a number of charges of insider trading being laid against him and a number of friends and acquaintances, including former Orioles teammate Eddie Murray. DeCinces had acted on information supplied by a friend and neighbor, James Mazzo, that the company Advanced Medical Optics, of which Mazzo was CEO, was about to be purchased; this netted DeCinces, Mazzo and a third person an illegal profit of some $1.7 million. The three had to pay a fine of $3.3 million to settle the SEC's charges; Murray's involvement was for a much smaller amount. But that civil lawsuit was not the end of the matter, as he and his collaborators also faced criminal charges. On November 28th, he was indicted for insider trading, being charged with 42 counts of securities fraud and one count of money laundering, facing a maximum term of 20 years in prison. He was convicted of 13 felony counts in May 2017 and sentenced to eight months of home detention and a $10,000 fine in the summer of 2019, after testifying against some of his co-conspirators.

Troy Glaus was a teammate of Doug's son, Tim DeCinces, at UCLA and apparently dated Doug's daughter. Tim had eight seasons in the minors, rising as high as AAA ball.