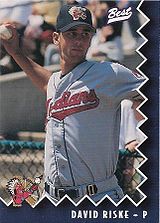 Pitcher David Riske was drafted by the Cleveland Indians in the 56th round of the 1996 amateur draft. He made his pro debut the following year with the Kinston Indians, going 2-2 with a 90 strikeouts and a 2.25 ERA in 72 innings. He returned to Kinston in 1998 and spent most of the year there, notching a league-best 33 saves.

After stops with the AA Akron Aeros and AAA Buffalo Bisons in 1999, he made his big league debut that August. Riske missed almost the entire 2000 season with injuries but bounced back in 2001, earning his first major league save and posting a 1.98 ERA in 26 appearances with the Indians. He struggled a bit in 2002 and saw his ERA balloon to 5.26, but he posted an encouraging 1.59 ERA in his final eight outings of the year. He ended the next season, 2003 as the Tribe's closer, finishing the season with 8 saves. However, he struggled as the team's closer in 2004 and moved back to set-up duty. Despite his struggles, he ended the year with a 7-3 record, 5 saves, and a 3.72 ERA in 72 games. Riske put up similar numbers out of the Indians bullpen in 2005, ending the season with a 3.10 ERA in 58 appearances.

Riske was traded to the Boston Red Sox before the 2006 season and was then sent to the Chicago White Sox for pitcher Javier Lopez that June. He pitched in the major leagues until 2010, when he made his final appearance with the Milwaukee Brewers in mid-August.