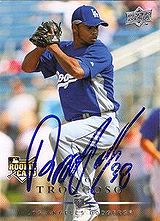 "My sinker sinks better when I pitch a lot and I can keep my pitches down." - Ramon Troncoso

Ramon Troncoso made his debut with the Los Angeles Dodgers in 2008. He pitched four years for the Dodgers and one year for the 2013 Chicago White Sox, appearing in 204 games total. His pro playing career went from 2005 to 2017.

Troncoso was the most-heavily-used pitcher on the Dodgers' staff when sent down to the minors in early July 2010 in a surprising move by manager Joe Torre. He was leading the team in pitching appearances and also leading relievers in innings pitched.

Troncoso became a pitching coach with the DSL Dodgers Guerrero in 2018 and DSL Dodgers Shoemaker in 2019.