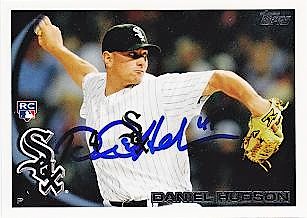 Daniel Hudson was signed by the Chicago White Sox and scouts Chuck Fox and Nick Hostetler as a 5th round pick in the 2008 amateur draft.

Hudson was the key player given up by the Chicago White Sox to acquire Edwin Jackson from the Arizona Diamondbacks at the trading deadline in 2010. Hudson was immediately successful for his new team, earning the National League's Rookie Player of the Month honors for August. He went 4-1 with a 1.85 ERA over the month, while striking out 42 in 43 2/3 innings.

On June 26, 2012, Hudson left a start against the Atlanta Braves with pain in his elbow. He was diagnosed the next day with a torn ligament in his elbow, a condition that led to Tommy John surgery, which was performed on July 9th. He was struggling with a record of 3-2, 7.35 at the time. Still recovering from the surgery, he was placed on the D-Backs' 60-day disabled list at the start of spring training in 2013. He made a first rehabilitation start with the AA Mobile Bay Bears on June 4th and felt more pain; he was diagnosed with another tear and was operated on a second time. He finally made it back to the majors on September 3, 2014, pitching an inning in relief against the San Diego Padres, completing a very long circle that saw him be out of the majors for 799 days.

Hudson pitched only three times with the Diamondbacks in 2014, but in 2015, he pitched 64 times for the D-Backs, making one start, with a record of 4-3, 3.86 and 4 saves. He logged 67 2/3 innings and recorded 71 strikeouts in a very solid comeback season. He continued to be a valuable member of Arizona's bullpen in 2016, when he pitched 70 times, with a record of 3-2 and 5 saves. His ERA jumped up to 5.22, but his other numbers remained fine: 65 allowed hits in 60 1/3 innings, 22 walks and 58 strikeouts. Seeing no major red flags apart from the high ERA, the Pittsburgh Pirates decided to take a chance on him after the season, signing him on December 19th to a two-year deal worth $11 million.

He pitched 71 times for the Pirates in 2017, going 2-7 with an ERA of 4.38. He also struck out 66 batters in 61 2/3 innings. On February 22, 2018, he was traded to the Tampa Bay Rays along with minor league IF Tristan Gray in return for OF/DH Corey Dickerson. He pitched poorly in camp, however, giving up 9 runs in 5 1/3 innings, and the Rays released him just as spring training ended, swallowing $5.5 million in salary in the process. He was then signed a few days later by the Los Angeles Dodgers, who decided to take a flyer on the veteran given he was now available at very low cost. In the immediate, he was asked to stay in Arizona for extended spring training. He ended up pitching 40 times for L.A., including one start, going 3-2, 4.11 as a useful middle reliever. He was not used in the postseason however, and in 2019 was released towards the end of spring training by the Dodgers before latching on a few days later with the Toronto Blue Jays. He had a chance to demonstrate with Toronto that he could still pitch well, going 6-3, 3.00 with 2 saves in 45 games as a set-up man for closer Ken Giles. At the trading deadline on July 31st, he was sent to the Washington Nationals for minor leaguer Kyle Johnston in a deal that barely registered on the news wire. It would turn out to be among the most consequential of that trading season, however, as he emerged as a god-send for the Nationals, whose bullpen was the weak link on a team playing very well after a poor start. He was 3-0, 1.44 in 24 games and recorded 6 saves as he stepped in for ineffective closer Sean Doolittle to help the team reach the postseason. He was then a key man as the Nationals claimed their first-ever World Series title, not allowing a run in the first three rounds while picking up a win and four saves. In the World Series against the Houston Astros, things were a bit tougher as he gave up 4 runs in as many innings, but the Nationals prevailed in seven games.

Hudson returned to Washington in 2020, the season that was trimmed to 60 games by the Coronavirus pandemic, and for 2021 as well. The first year was tough as his ERA was 6.10 in 21 games even though he did record a career-best 10 saves. The second year, though, while no longer the closer, he was an excellent set-up man for Brad Hand, going 4-1 with a 2.20 ERA in 31 games. He was on the COVID-19 list, following teammate Trea Turner testing positive for the disease, when on July 29th, he was traded to the San Diego Padres in return for Mason Thompson and Jordy Barley. On the same day that Hand was traded to the Blue Jays, as the Nats were once again out of the playoff picture.