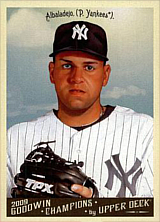 Jonathan Albaladejo spent parts of five seasons in the big leagues, battling injuries and weight problems throughout his career, and enjoyed a couple fine years in the Puerto Rican Winter League. Utilizing a fastball as fast as 95 mph, his first major league appearance came on September 5, 2007, with the Washington Nationals, striking out three batters in 1 2/3 innings.

Albaladejo had a 1.85 ERA in his second year at junior college, 4th lowest in the nation. The Pittsburgh Pirates heeded the word of scout Delvy Santiago and picked him in the 19th round of the 2001 amateur draft, one pick ahead of Zach Duke. Albaladejo was 0-3 with a 4.74 ERA that year for the GCL Pirates but did strike out 24 in 19 innings. In 2002, he returned to the GCL Pirates and had a 3-2, 2.40 record. He only walked 6 in 60 innings, placing him third in the Gulf Coast League in fewest walks per 9 innings. He allowed 71 hits, though, second-most in the loop. Albaladejo then had a huge 2002-2003 season for the Mayaguez Indians. The big right-hander was 2-0 with a save and a 0.68 ERA, leading the Puerto Rican League.

Jonathan had a solid season in 2003 with the Hickory Crawdads, going 12-5 with one save, a 3.11 ERA and 5 complete games, most among Pirate farmhands and also leading the South Atlantic League. He fanned 110 and allowed just 19 walks in 139 innings while allowing a .225 average. He was third in the league in BB/9. His winter season was worse than a year earlier as he was 3-3 with a 4.54 ERA for Mayaguez. In 2004, Albaladejo's fastball dipped from the 90s to the high 80s and he got hit hard as a result. He only was 8-8 with a 4.33 ERA for the Lynchburg Hillcats. In winter play, he was 5-2 with a 2.98 ERA and tied for the Puerto Rican League lead in victories. Returning to Lynchburg for 2005, he had a 4-3, 3.91 record with 2 saves, primarily working out of the bullpen. He struck out almost a batter per inning. Jonathan was limited in 2006 by a muscle strain. He spent time with the Altoona Curve (1-2, 1 save, 4.00 ERA, 5 BB in 36 innings) and a rehab stint with the GCL Bucs (1-0, 2.92). In winter play, he again led the Puerto Rican League in victories (6) and had a 2.12 ERA. He was named to the league All-Star team as the top right-handed pitcher. In the 2007 Caribbean Series, he allowed six runs in one inning in a loss to the Aguilas Cibaeñas; it was a major blow as Puerto Rico went into the game tied with the Aguilas for the top spot.

A six-year minor league free agent, Albaladejo moved to the Washington Nationals system in 2007. He pitched for the Harrisburg Senators (3-0, 1.13 in 15 games) and the Columbus Clippers (4-3, 2 saves, 4.17 in 21 contests). He was called up to the major league team at the beginning of September and, in his first full game for Washington, retired all five batters faced, striking out the final three. He allowed one inherited run, as Tim Redding had left men on first and third; Josh Willingham's grounder scored Jeremy Hermida. Albaladejo was 1-1 with a 1.88 ERA in 14 games for the Nationals, allowing only 7 hits in 14 2/3 innings while striking out twelve. That winter, he was traded to the New York Yankees for Tyler Clippard.

Albaladejo was injured for most of 2008, but did make 7 appearances for the Yankees. He was not as good as the previous year, allowing 15 hits and 6 walks in 13 ⅔ innings and was charged with a loss in his only decision. Still, he did strike out 13 batters, demonstrating that his fastball still had bite. He also pitched in six games in the minors, two rehab starts for the Staten Island Yankees of the New York-Penn League, and four games with the AAA Scranton/Wilkes-Barre Yankees, totaling only 11 innings of work between the two stops. Back with SWB in 2010, Albaladejo was dominant as a closer, beating the old International League mark of 38 saves in a season that had been held by Matt Whiteside since 2004.

Signing with the Yomiuri Giants for 2011, he debuted on April 16 with two hitless, scoreless innings of relief, walking one. His last big league appearances came with the 2012 Arizona Diamondbacks, following a season in which he racked up 25 saves as the closer for the Triple A Reno Aces. Since 2013, he has pitched in several minor league chains, headed south of the border to Mexico and settled in as a cog for the Lancaster Barnstormers of the Atlantic League, becoming a player-coach for the 2019 season.