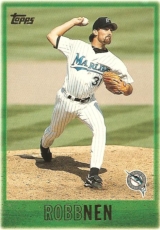 Son of Dick Nen, Robb Nen was the first member of the Florida Marlins to ever record 100 saves. Robb retired with 314 lifetime major league saves. He has four more saves than Goose Gossage and fourteen more than Bruce Sutter, although their usage pattern was completely different, so they are not truly comparable. He retired with 206 saves as a member of the San Francisco Giants and 108 with Florida. As of 2015, he remains the all-time leader for both teams.

In World Series play, he recorded four saves, as a member of the Marlins' Championship team in 1997 and with the San Francisco Giants in the 2002 World Series. Those were his last professional pitching appearances, as injuries forced him to miss both the 2003 and 2004 seasons, after which he retired.