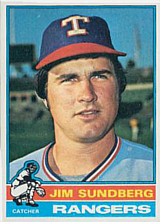 Jim Sundberg became the regular catcher of the Texas Rangers on Opening Day 1974, after just one season in the minors. He held the starting job until the end of the 1983 season, when he was traded to the Milwaukee Brewers. His rookie season was also the first season of Billy Martin as Rangers' manager, and he gave important responsibilities to a number of young players besides Sundberg: Mike Hargrove moved straight from Class A to winning the Rookie of the Year Award as the starting first baseman, and RF Jeff Burroughs won the MVP Award. Sundberg played almost every day over the next few years, with 140 to 155 games each year from 1975 to 1980, and then played in 102 of the team's 105 games in the strike-shortened 1981 season. He was not a great hitter, but still maintained an OPS+ around 100 in those years while providing outstanding defense behind the plate. He was an All-Star as a rookie in 1974 and again in 1978.

Sundberg returned to the All-Star Game in his only season with the Brewers in 1984 with a year that was very much in line with his previous seasons. In 1985, he moved to the Kansas City Royals where he took over for John Wathan as the starting catcher and helped the team win the first World Series title in its history. It was the only time in his career he played in the postseason, and he started all 14 games. He had a homer and 6 RBI in the win over the Toronto Blue Jays in the ALCS, and scored 6 runs with a pair of doubles in the World Series triumph over the St. Louis Cardinals. He played one more season as a starter, in 1986, but hit just .212 in 140 games, although with a career high of 12 homers. After the season, he was traded to the Chicago Cubs, where he shared the starting job with Jody Davis in 1987 and the first half of 1988. After being released by the Cubs, he returned to the Rangers where he finished the 1988 season and played in 1989, sharing catching duties with a young Chad Kreuter. He retired after that season, having played 1,962 games over 16 seasons, hitting .248 with 95 homers and 624 RBI.

He was born and grew up in the small town of Galesburg, IL, which is best known as the home of poet Carl Sandberg. Both men share a very similar last name of Scandinavian origin.