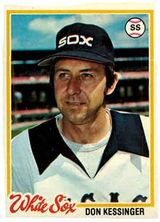 Don Kessinger ably manned shortstop for the Chicago Cubs for more than a decade from 1965 to 1975. With good range and a strong arm, Kessinger's trademark play was to backhand a ground ball deep in the hole, leap into the air, and without planting his feet throw the runner out from short left field. During an interview with Harry Caray on the Fourth of July, 1969, Hall of Famer Fergie Jenkins coined this play "The Down Pat".

He was often the Cubs' leadoff hitter during that period, even though his career batting average was only .252 and his OBP .314. His top years came in the second dead-ball era, depressing his career averages. He did score over 100 runs twice, in 1969 and 1970. He did not have much power, hitting just 14 homers in 2,078 games. When he hit his first major league homer, off Jim O'Toole of the Cincinnati Reds on May 14, 1966, in his third season, it was also his first as a professional: in 123 minor league games, he had not gone deep once. He made his pro debut in 1964, playing 77 games in the Texas League with the Fort Worth Cats, where he hit .236, but he was called up to the Show that September, going 2-for-12 in 4 games. In 1965, he was back in the Texas League, with the Dallas-Fort Worth Spurs and hit .285 in 46 games before earning a promotion to Chicago in early June. He was the starting shortstop the rest of the way, hitting .201 in 106 games with the Cubs. He never looked back, keeping the starting job for 11 seasons and made the All-Star team six times during that period. He only gave up the job when he was traded to the St. Louis Cardinals in return for P Mike Garman and a minor leaguer after the 1975 season. He was still the starter in St. Louis at the beginning of 1976, but a young Garry Templeton came up during the season and rapidly took over as the starter. He stayed on as a backup infielder in 1977, being traded in mid-season to the Chicago White Sox.

Kessinger was a player/manager in 1979 for the White Sox, the last player-manager in American League history. He did not do well in either role, batting just .200 and winning 46 games against 64 losses. He managed for most of the year, and was replaced by Tony LaRussa on August 3rd, in LaRussa's first managerial role. At that point, he retired as a player and he never managed again in professional baseball.

Kessinger was an excellent basketball player and was named to the SEC "Decade of the 60's" first-team basketball squad (along with Pete Maravich, Louie Dampier, Dan Issel, and Neal Walk).

Kessinger was the head coach at the University of Mississippi from 1991 to 1996. He is the father of Keith Kessinger and Kevin Kessinger. His grandson (and Kevin's son), Grae Kessinger, was drafted by the Houston Astros in the 2nd round of the 2019 Amateur Draft.