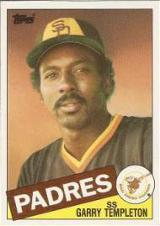 Garry Templeton was a sensation in his first six years in the big leagues with the St. Louis Cardinals, hitting over .310 three times and never sinking below .280. While he went on to play sixteen major league seasons, he only once got back to .280. After the 1981 season, he was involved in a celebrated trade which brought Ozzie Smith to St. Louis. It was prompted in part by an incident late in 1981 when Templeton made an obscene gesture at the crowd in St. Louis while being removed from a game. Templeton went on to play a decade for the San Diego Padres.

Templeton led the National League in triples three years in a row, from 1977 to 1979. He also led the league in intentional walks in 1984 and 1985, although he was a player who drew few regular walks. It was because he usually hit in the 8th slot in the Padres' line-up. He stole 242 bases lifetime, although he was only once in the top ten in the league.

When he appeared in the 1984 World Series and hit .316, he was 28 years old. He was four years older than teammate Tony Gwynn, while Steve Garvey was 35 at the time. He batted eighth in the lineup in the Series.

After his playing days he managed in the minors, reaching as high as Triple A ball. In 2005-2006 he managed the independent Fullerton Flyers of the Golden Baseball League.

Templeton's father, Spiavia Templeton, is listed in some sources as a Negro League infielder but is not included in The Biographical Encyclopedia of the Negro Baseball Leagues. He may have played in a lesser Negro league or after 1950, in the dying days of the leagues. Garry's brother, Ken Templeton, was a minor league outfielder and pitcher in the Oakland A's chain in 1972-1973. Templeton's son, Garry Templeton, Jr., played in the Anaheim Angels farm system in 1999 and 2000, and played in independent baseball thereafter.