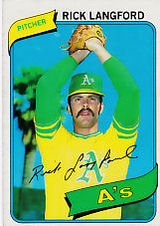 Pitcher Rick Langford played eleven years in the majors and is best remembered for his 1980 season, when he recorded 19 wins and 28 complete games.

Langford was selected by the St. Louis Cardinals in the 1971 amateur draft and the Cleveland Indians in the 1972 amateur draft but did not sign, attending Florida State University instead. He was signed by the Pittsburgh Pirates as a free agent in 1973 and rose through their minor league ranks over the next several seasons. While playing for the AAA Charleston Charlies of the International League, he threw a no-hitter against the Memphis Blues on May 30, 1976. The following month, he was called up to the majors by the Pirates for his big league debut. He made a dozen appearances for the club, going 0-1 with a 6.26 ERA.

Prior to the 1977 season, Langford was traded to the Oakland Athletics as part of a nine-player deal. He joined the A's rotation and went on to lead the American League with 19 losses in his first year with the club. He put up relatively unspectacular numbers the next two years, in 1978 and 1979, until Billy Martin took over as the club's skipper in 1980. Martin was famous for riding his starting pitchers - Langford, Mike Norris, Matt Keough, Steve McCatty and Brian Kingman - extremely hard that season, making the A's into a surprise contender in the AL West. Langford led the AL in both complete games and innings pitched, and he pitched 22 consecutive complete games, which is the most in the AL since that time. The AL record is 37, by Bill Dinneen of the Boston Americans in 1904. On October 2nd of that year, he committed the first error of his major league career after setting the record of 230 consecutive errorless chances (over 142 games) for a pitcher.

In 1981, Langford notched 12 victories and led the AL with 18 complete games before earning a win in the Division Series against the Kansas City Royals. However, he began showing signs of fatigue in 1982, when he lost 16 games. He spent the remaining years of his career bouncing on and off the disabled list, never pitching more than 60 innings in any season after 1983. He ended his big league career by going 1-10 with a 7.36 ERA for the A's in 1986.