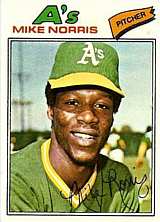 Mike Norris played ten seasons in the majors and was runner-up for the American League Cy Young Award in 1980.

Selected by the Oakland Athletics in the January 1973 amateur draft, Norris gradually moved through the ranks of their organization. He reached the majors in 1975 and shut out the Chicago White Sox in his first big league game. That year, he tied the record, previously set by Earl Moore, for most games started in a season without allowing an earned run; he appeared in four games - starting three - allowing no earned runs. But he won just 11 games over the next four seasons, recording ERAs of over 4.77 each year.

Billy Martin took over as the A's skipper in 1980, and he was famous for riding his starting pitchers - Norris, Rick Langford, Matt Keough, Steve McCatty and Brian Kingman - extremely hard, making the team into a surprise contender in the AL West. Norris put up perhaps the best numbers, going 22-9 with a 2.53 ERA, 180 strikeouts, and 24 complete games to finish second to Steve Stone in Cy Young Award voting. The next year, he went 12-9, pitched in the All-Star Game, and earned a shutout victory over the Kansas City Royals in the first game of the Divisional Playoffs. However, he then developed arm problems and struggled with drugs, and the A's released him in 1985. He pitched for the independent San Jose Bees in 1986.

After several years away from baseball, he made a comeback in 1989, re-signing with the A's organization. After spending most of the year with the Tacoma Tigers, he made it back to the big leagues in 1990, going 1-0 with a 3.00 ERA in 14 outings for Oakland. Following that season, he played for the San Bernardino Pride of the Senior Professional Baseball Association, appearing in 6 games and going 2-3 with a 4.05 ERA before the league folded.

During his career, Mike wore a green glove when he took the mound, an unusual color for a ballplayer but a great choice pitching for the green-and-gold A's squads.