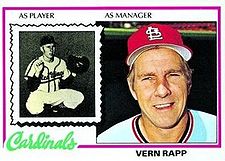 Catcher Vern Rapp played in the minors from 1946 to 1960, missing the 1951 and 1952 seasons due to military service. He was in the St. Louis Cardinals chain from 1946 to 1954, although he was on loan to the New York Yankees chain in 1954. Rapp played 9 seasons at AAA. He then managed in the minors in 1961 and 1962 and from 1965 to 1976. Between 1961 and 1976, he was 3 for 3 as a pinch hitter. He had considerable success as a minor league manager, winning the American Association title with the Denver Bears in his last season, with an outstanding team that featured an outfield of Andre Dawson, Ellis Valentine and Warren Cromartie.

Rapp managed the St. Louis Cardinals in 1977 and part of 1978. When he was named the Cardinals' manager, he had never been to the major leagues as either a player or a coach, and not surprisingly, his management style, honed in the minor leagues, clashed with the habits of established major league players. In particular, his imposition of strict discipline and his rules regarding how to dress and on wearing facial hair were very poorly received. The latter irked catcher Ted Simmons, the team's best player, who was used to wear his hair in a long mane, and reliever Al Hrabosky, whose fu-manchu mustache was part of his act as "the Mad Hungarian". Other players, such as Roger Freed and Tony Scott, who had played on a championship squad under Rapp's guidance at Denver in 1976, were supportive of their leader. Still, the Cardinals played well in their first season under Rapp's direction, finishing third in the NL East. However, spring training in 1978 was racked by dissension, and after the team got off to a poor start out of the gate in the regular season, Rapp was fired before the end of April. He was replaced by former Cardinals star third baseman Ken Boyer, who had been passed over as a replacement for Red Schoendienst after the 1976 season and had moved to the Baltimore Orioles organization as a result.

Rapp was a Montreal Expos coach from 1979 to 1983. He was also skipper of the Cincinnati Reds in 1984 before being replaced by Pete Rose in mid-season. He was slated to retire after the 1983 season, and some reporters in Boston, MA decided to play a practical joke at the time, as news in the city was saturated with stories about the upcoming retirement of team icon Carl Yastrzemski; they thought that by highlighting the retirement of the completely unknown Rapp, it would serve as a comic counterpoint to the Yaz story. They played it straight, getting tributes from various persons who had known him, and that included a senior official in the Reds organization, VP of Player Personnel Sheldon Bender, to talk about Rapp's time as manager of the Indianapolis Indians in the early 1970s. Apparently, that triggered Bender to consider Rapp, who had not been on the team's radar at all, as a potential manager. To everyone's surprise, he was given the job after Russ Nixon was fired after the season. The Reds were looking for a disciplinarian, thinking that Nixon had been too laid-back, but the players never bought on to the change, finding that Rapp's methods were stuck in another era. Things went badly from the start, and by early August, it was clear the Reds had made a mistake by hiring the dark horse candidate to manage the team. He was fired on August 16th and replaced by Reds legend Rose, who was repatriated from the Expos in a trade for utility infielder Tom Lawless and was named player/manager. Rose's appointment created a media frenzy and the Rapp episode was quickly forgotten.