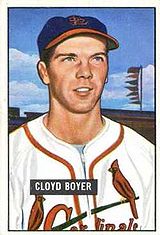 Cloyd Boyer had a five-year career pitching in the major leagues, mostly with the St. Louis Cardinals at the time of Stan Musial. He also played one season with the Kansas City Athletics managed by Lou Boudreau. In 111 appearances on the bump (48 starts), he was 20-23 with a 4.73 ERA. He continued pitching in AAA through 1961, accumulating 117 minor league victories. Later, he was a major league coach.

Cloyd is the older brother of major leaguers Ken and Clete, minor leaguers Wayne, Lynn, Len and Ron, and uncle of Dave and Mickey Boyer. Cloyd served in the Navy in 1945-1946.