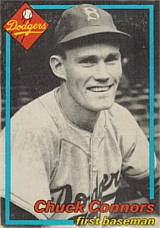 "I owe baseball all that I have and much of what I hope to have... Baseball made my entrance to the film industry immeasurably easier than I could have made it alone. To the greatest game in the world I shall be eternally in debt." - Chuck Connors, 1953 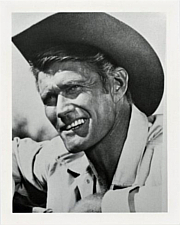 Chuck Connors played two seasons in the major leagues. For part of the 1951 season, he was the starting first baseman for the Chicago Cubs. But he was far better known as the star of The Rifleman, a television series that ran from 1958 until 1963. He was originally spotted by Hollywood while playing in the minors for the Los Angeles Angels in 1952. His first role was in the Spencer Tracy/Katherine Hepburn comedy Pat and Mike. He also had roles in movies and miniseries like Airplane II and Roots, appearing more than a hundred times in various movie or television roles.

Connors was also a professional basketball player for a couple of seasons. During his brief basketball career, he earned the distinction of being the first player to break the glass behind the basket while dunking during a regular season game, an honor many people believe is held by "Chocolate Thunder" Darryl Dawkins. Source: Eric Nadel's radio series: "A page from Basketball's past."

Connors was a baseball, basketball and football star in high school, playing for a private school on an athletic scholarship. When Connors was acting up in college, his teacher (Father Gilhooley) told him to take part in the declamatory contest if he liked to talk so much. Chuck did and won, which helped him develop his interest in acting. Connors was a teammate of NBA Hall of Famer Bob Davies in college, but preferred baseball and signed with his hometown Brooklyn Dodgers in 1940.

Going 1-for 11 for the Newport Dodgers in 1940, he broke his finger after four games and did not play again for two years, attending Seton Hall in the fall of 1940 and being placed on the voluntarily retired list in 1941. The Binghamton Triplets drafted him in the class-A phase of the 1941 Rule V Draft off of the Johnstown Johnnies roster, putting him in the New York Yankees chain. Replacing Joe Collins at first base with the Norfolk Tars, Chuck hit .264 and slugged .408. Teammate Bill Wight recalled that Connors often would recite Casey at the Bat, Sheakespeare or other poetry. Connors was drafted by the US Army in November 1942 and became an instructor in tank maintenance and operation. On leave, he played basketball in the American Basketball League for the Brooklyn Indians. In 1945-46, he played with the National Basketball League's Rochester Royals as a teammate of Del Rice.

Chuck decided to write "The Mahatma", Branch Rickey, in 1946, asking for the Dodgers to acquire him. The Yankees soon waived him and Brooklyn him back on April 23. He was assigned to the Montreal Royals and was a spring training teammate of Jackie Robinson before being sent down to the Newport News Dodgers, where he batted .293/~.373/.507, stole 19 bases and homered 17 times. He led the Piedmont League in home runs, six more than anyone else. That year, he played regularly for the Boston Celtics in the BAA, a forerunner to the NBA. He would play briefly for the Celtics the next year but devoted his attention to baseball thereafter.

In 1947, Chuck helped the Mobile Bears to their first Southern Association title in 25 years. He hit .255/?/.424 with Mobile, second on the Bears in homers (15, 6 behind "Shotgun" George Shuba) and tied for 7th in the Association. Connors met his future wife, Canadian model Elizabeth Riddell, on a blind date in 1948, and had a very good year at AAA, batting .307/~.382/.496 with 88 RBI, 36 doubles and 17 homers for the pennant-winning Montreal Royals. He was one double behind International League leader Johnny Groth, tying Hal Rice for second. In the 1948-49 Cuban Winter League, Chuck hit .257 and slugged .361 for the champion Almendares team and made the league All-Star team at first. In the 1949 Caribbean Series, he tied for the lead in doubles (3) and steals (4) while batting .409 and slugging .545 for the champs.

In 1949, Connors made Brooklyn's roster out of spring training as the backup first baseman behind Gil Hodges, a teammate of his in 1946. Chuck finally appeared in the 13th game as a 9th inning pinch-hitter for Carl Furillo with one on and one out against "The Mad Monk" Russ Meyer of the Philadelphia Phillies. Connors rapped into a double play, Meyer to Granny Hamner to Eddie Waitkus, to end the game, in his only at bat for his hometown team. Manager Burt Shotton said later that he had hoped to reduce the odds of a double play - and in retrospect, it was a good call, as Connors did not ground into another one in 201 more at bats. After another 12 days on the bench, Chuck was sent back to Montreal, where he hit .319/~.385/.514 with 108 RBI, 84 walks and 20 home runs despite his late addition. Chuck returned to Almendares in winter play and hit .287, slugging .412 as the team again finished first. He did not play in the 1950 Caribbean Series.

In his third year in Montreal, Connors put up a .290/~.399/.423 season with only six homers, though he was still clearly reaching base enough. Unfortunately, Hodges still held down first for Brooklyn and would for another decade. Connors was taunted regularly by fans in other cities; in one instance, he threw raw hamburger into the crowd in Rochester, NY, saying "Eat, you wolves!"

Connors was dealt with another first baseman, Dee Fondy to the Chicago Cubs for Hank Edwards and cash after the 1950 season. Phil Cavarretta was aging and the first base job was opening up in the Windy City. Fondy won the role to begin 1951 while Connors was sent down to the Los Angeles Angels, and he hit .321/~.394/.572 in 98 games in the Pacific Coast League before being called up to Chicago. He became the starter the rest of the way and wound up with the most games at first for the team, hitting a disappointing .239/.282/.303, a far cry from what he had shown in AAA. Fondy got the job back the next year and held it for five years. In 1952, Connors returned to LA to bat .259/~.321/.379 in a rapid decline and injured both shoulders. He continued to please the celebrity hawks with his antics in the field.

Connors had first been offered an acting job by a baseball fan from the movie industry in 1951 and retired from baseball two years later, feeling that his career was over for the most part and that he might not recover from his shoulder injuries. While he was slowly developing his acting resume, he did a pregame show for the PCL, sold insurance and was a door-to-door salesman for water softener. In 1957, Connors' acting career took off with his performance in Old Yeller, earning him the titular role in The Rifleman. To develop the role, Chuck learned to speak without his Brooklyn accent and taught himself how to care for a horse. He became arrogant with his new stardom before tiring of the Hollywood star lifestyle and cutting back and developing perspective. He had earlier said that "Talent is God-given. Be humble. Fame is man-given. Be grateful. Conceit is self-given. Be careful," and did heed his axiom after the initial rush of fame. He was divorced in 1962, having had four sons.

There were rumors that Connors would run for the Senate in the 1960s, but he decided not to. While he was friends with Republicans like Richard Nixon and Ronald Reagan, he criticized the conservative movement's disdain for welfare and intellectuals and devotion to religious orthodoxy, preferring a middle of the road political agenda. Being so close to scandal-plagued politicians also made him cynical about politics over time. Connors was an avid reader and his secretary said he read 250 books a year and retained it all. After his acting career quieted down, he worked more on a ranch he owned in Southern California.