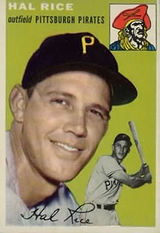 Hal Rice was signed by the St. Louis Cardinals as an amateur free agent before the 1941 season began and was assigned to their Williamson Red Birds farm team in the class D Mountain State League. He finished the season there with a batting average of .258 in 58 games. He started the 1942 season at Williamson, getting into 65 games and hitting for a .349 average. This was good enough to get him sent up to the Asheville Tourists of the class B Piedmont League, where he finished out the year.

The United States Army called in 1943 and Hal spent until 1945 in the Armed Services where he earned the rare Battlefield Commission while serving in the South Pacific. While in a hospital recovering from a service injury Hal met his wife to be, June Shreve, a Registered Nurse from Muncie, Indiana and the couple married in 1947.

Home from the service in 1946, Rice took up his career with the Winston-Salem Cardinals of the class C Carolina League. He finished the season there, hitting .335 in 106 games. This display earned him a shot with the Cardinals' AAA Rochester Red Wings farm club in 1947, where he played 114 games and hit .248.

1948 was to be a big year for "Hoot", as some people called him, as he busted International League pitching for 172 hits and a .321 batting average. He was called up to the parent Cardinals to finish out the 1948 season, getting into 8 games, where he got 10 hits in 31 at bats for a .323 average. When Hal Rice suited up for the Cards in 1948, he became the first Ball State College student to play Major League Baseball. Ball State College would not be known as "Ball State University" until 1965.

Hal had a seven-year major league career in the National League as a back-up outfielder. He mostly played left field. During much of his career he was with the St. Louis Cardinals where Stan Musial was the left fielder, but Musial typically moved around a lot to first base or center field, giving Rice the opportunity to play.

On June 14, 1953 St. Louis traded Rice to the Pittsburgh Pirates for Pete Castiglione after the Bucs had traded left fielder Ralph Kiner. Rice ended up playing more left field than anyone else on the team that season. In June of 1954 the Pittsburgh Club traded Hal to the Chicago Cubs for Luis Marquez, where Rice finished out his Major League career filling in for Hank Sauer in right field.

1955 found Rice with the Los Angeles Angels of the Pacific Coast League where he had 493 at bats and hit .262. Rice's last year in organized baseball came in 1956, playing with three different AAA teams, the Denver Bears, Richmond Virginians and Sacramento Solons. He totaled 116 games of playing time and had a combined batting average of .241.