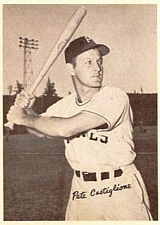 Pete Castiglione was a strong-armed third baseman who was signed by the Pittsburgh Pirates before the 1940 season. He was assigned to the Hutchinson Pirates of the Class C Western Association for his initial season. He appeared in 64 games, hitting .274 and fielding .901. He was with the Class D Moultrie Packers for 92 games for part of 1941, hitting .280 and also played 23 contests with Hutchinson. Pete was with the Class B Harrisburg Senators of the Interstate League for the 1942 season, appearing in 123 games, hitting .265 and fielding .931. Castiglione was then in the United States Navy for three years during World War II before returning to baseball in 1946. Back from the war for more baseball action, he spent 1946 with the Class B Selma Cloverleafs where he appeared in 134 games and came within a few points of winning the batting title by hitting .342 along with 8 home runs. This performance elevated Pete to the AAA Indianapolis Indians, where he hit .270 in 1947 and .308 in 1948; he also had brief stays in Pittsburgh both years.

Primarily a third baseman who could also play all over the infield and outfield, he became a regular for the Pirates from 1949 until 1953 and finished his eight-year major league career the following season with the St. Louis Cardinals, having been traded on June 14, 1943 for Hal Rice and cash. Pete finished with a career .255 average and .959 fielding percentage. Pete, who only hit 24 homers, had two of them in a game on August 26, 1951, as the Pirates rallied from a 9-2 deficit to beat the Brooklyn Dodgers, 12-11.

Castiglione spent four more seasons in baseball, playing mostly in the high minors, before retiring in 1958. He was 37 years old and played 16 years of professional baseball. He worked as a mail carrier for the United States Postal Service from 1958 to 1986 and retired in Pompano Beach, Florida. He also coached baseball for a time and continued to participate in old-timers games in Florida until he was in his sixties. He died in 2010 at age 89.