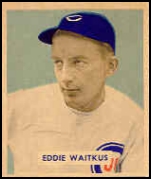 Eddie Waitkus was an eleven-year major leaguer who hit a lifetime .285. Although a competent hitter, he had little power - clubbing only 24 homers in 11 seasons.

Born in Massachusetts, he attended Boston College. Signed as a free agent in 1939, Waitkus began his big league career with the Chicago Cubs in 1941 when he was 21. He also played for the Los Angeles Angels in 1942, leading the Pacific Coast League in hits.

The war intervened, and it was 1946 before he played in the majors again. He served in the military during World War II, won four Battle Stars, and was wounded. By 1946, he had become a Cubs regular at first base.

He had perhaps his finest season on the 1948 Chicago Cubs team with Andy Pafko and Bill Nicholson. Eddie hit .295 and made the All-Star team. After the season, he was traded to the Philadelphia Phillies.

Waitkus got off to a hot start in 1949, hitting .305. However, on June 14th of that year, he was shot with a .22 caliber rifle in a Chicago, IL hotel by Ruth Ann Steinhagen, an obsessed teenage fan (à la Roy Hobbs in The Natural). The injury almost cost him his life.

After several operations to remove the bullet, he amazingly returned to baseball and was a key member of the Phillies' 1950 "Whiz Kids" team. He hit .267 in the 1950 World Series, batting in the leadoff spot ahead of the 23-year-old Richie Ashburn.

Waitkus later played a season and a half with the Baltimore Orioles before returning to the Phillies to end his career. Later in life, he worked summers at the Ted Williams baseball camp. He died in Massachusetts at the age of 53.