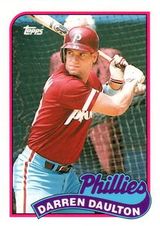 Darren Daulton was a catcher who spent nearly his entire career with the Philadelphia Phillies.

Daulton was signed as a 25th round pick in the 1980 amateur draft by the Phillies and scout Dave Burroughs. He made his major league debut in 1983, playing in two games. He was considered the catcher of the future for the Phillies in 1984 before a knee injury ended his season. From 1985 to 1988, Daulton was hampered by knee problems and a low batting average.

Finally, in 1990, Daulton broke out. He hit .268 with 12 home runs, playing in 143 games, a career high. After being injured in a 1991 car accident, Daulton had a career year in 1992 when he was named to the All-Star team and led the league with 109 RBI. He was only the fourth catcher in NL history to lead the league in RBI (the others were Gary Carter, Johnny Bench and Roy Campanella; the feat has not been accomplished in either league since Daulton did it). Along with Lenny Dykstra and John Kruk, Daulton was one of the catalysts on the 1993 Phillies NL pennant winners. Although the Phillies lost the World Series, Daulton was again an All-Star and drove in more than 100 runs for a second consecutive season.

Unfortunately, knee injuries again caught up with Daulton. He missed most of the 1994, 1995, and 1996 seasons. In 1997, after 17 years with the organization, the Phillies traded Daulton to the Florida Marlins to give him a chance to win the World Series. After the Marlins won the crown, beating the Cleveland Indians in seven games, Daulton announced his retirement. After the season, he won the Comeback Player of the Year Award.

After his playing days, Daulton was bullpen coach of the Tampa Bay Devil Rays in 2001. He hosted a nightly radio show in Philadelphia called: "Talking Baseball with Dutch". In 2007, he authored a book on occultism and numerology, If They Only Knew, detailing his experiences with the paranormal. In 2010, he was inducted into the Philadelphia Baseball Wall of Fame.

In June 2013, he had two cancerous brain tumors surgically removed in a seven-hour operation. The successful operation was to be followed by radiation treatments and speech therapy. However, the tumors were the manifestation of the same invasive form of brain cancer that had claimed the life of Hall of Fame catcher Gary Carter a year earlier, and Daulton's longer-term prognosis was poor. Three other members of the Phillies family, catcher Johnny Oates, pitcher Tug McGraw, a former teammate, and coach John Vukovich had also succumbed to the same illness, making some observers wonder whether there were environmental factors related to the team's former ballpark, Veterans Stadium, at play. Dutch died August 6, 2017 at the age of 55.