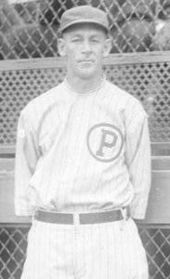 Wilhelm was born in Wooster, Ohio, and was pitching amateur ball in Ohio as early as 1895. He spent a portion of the 1902 season as manager of the Birmingham Barons of the Southern Association before reaching the majors as a 29 years old with the 1903 Pittsburgh Pirates. As a rookie, when he went 5-3, posting what would be the only winning record of his big league career, as the Pirates won the pennant and participated in the first World Series. After spending 1904 and 1905 with the Boston Beaneaters of the National League and losing more than twenty games in both seasons, he returned to Birmingham for two years and won more than twenty in each of them. In 1906, he threw a perfect game for the club, and the following year, he set a record by throwing 59 consecutive scoreless innings.

Wilhelm began another three-year stint in the majors with the Brooklyn Superbas in 1908. After that, he returned to the minors again, going 18-7 for the Rochester Hustlers in 1913. He was back in the majors with the Baltimore Terrapins of the Federal League in 1914, going 12-17 in a career-high 47 appearances. The book The Federal League of Base Ball Clubs indicates that Wilhelm was released in 1915 and made a Federal League umpire. He worked 52 games, all but one of them as the base umpire. He had earlier been a fill-in umpire in the National League for one game each in 1904 and 1905.

After several more years in the minors, Wilhelm replaced Bill Donovan as manager of the Philadelphia Phillies in 1921 and also appeared in four games as a pitcher at age 47. He appeared in his final minor league game as a 49-year-old with the Rochester Tribe in 1923.

Although he is remembered as "Kaiser Wilhelm", many if not most news accounts of his time seem to refer to him as Irvin Wilhelm.