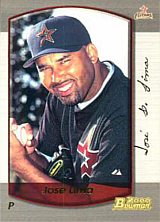 "If I can't pitch on this team—the worst or second-worst team in baseball—where am I going to pitch? If I can't start on this ballclub, I must be the worst pitcher on Earth." - Jose Lima, after being released by the 2002 Detroit Tigers, who finished 43-119

José Lima played thirteen seasons in the majors, winning 89 games and appearing in the 1999 All-Star Game.

Originally signed by the Detroit Tigers in 1989, Lima reached the big leagues with the club in 1994. Following the 1996 campaign, he was dealt to the Houston Astros as part of a nine player trade. By 1998, he was a key part of the Houston rotation, recording 16 wins. The following season, 1999, would be his best in the majors, as he finished 21-10 with a 3.58 ERA and his team won the NL Central title. Lima is listed as having played one game at third base in 1999, although he never actually took the field at the position. The quirk was a result of the Astros' game of June 13th against the San Diego Padres being suspended with the Astros batting in the bottom of the 8th inning when manager Larry Dierker suffered a seizure in the dugout. When the game was resumed on July 23rd, two of the Astros' players - center fielder Carl Everett and third baseman Ricky Gutierrez - were now on the disabled list, while starting pitcher Shane Reynolds was unavailable to return to the mound. As the Astros could not leave the two positions in their lineup unoccupied while they completed their turn at bat, but not wanting to commit to a precise spot in the batting order for their pitcher, they inserted the name of two starting pitchers in the lineup when play resumed: Scott Elarton in center field and Lima at third base. When the Padres came to bat in the top of the 9th, Dierker, who had since returned to the helm, inserted regular substitutes for his two "ghost players".

Lima struggled in 2000, losing 16 games as his ERA ballooned to 6.65. Midway through the following summer, he was traded back to the Tigers for Dave Mlicki. He was released by Detroit late in the 2002 season and began the next year with the Newark Bears of the independent Atlantic League. After going 6-1 with a 2.33 ERA in 8 starts for the Bears, his contract was purchased by the Kansas City Royals, and he went 8-3 in 14 games for the team. Signed by the Los Angeles Dodgers prior to the 2004 season, Lima went 13-5 for the club and threw a five-hit shutout in Game 3 of the National League Division Series versus the St. Louis Cardinals. Back with the Royals in 2005, he lost 16 games while his ERA swelled to nearly 7.00. He ended his big league career with the New York Mets in 2006, giving up 19 earned runs and losing each of his 4 starts for the team.

Following his days in the majors, Lima continued to play professionally. He was 4-3 with a 2.78 ERA in the 2006-2007 Dominican League season, then went 5-0 with a 1.54 ERA in the playoffs. He was 0-1 with a 2.33 ERA in the Caribbean Series, taking the lone loss for the Águilas Cibaeñas. In 2007, he was 13-4 with a 3.60 ERA for the Saraperos de Saltillo, tying Nerio Rodriguez for the most wins in the Mexican League. He split 2008 between the Korea Baseball Organization and the Atlantic League. With the KIA Tigers, he was 3-6 with a 4.89 ERA before being released to make room for Kane Davis. He pitched in the independent Golden Baseball League in 2009 for the Long Beach Armada and the Edmonton Capitals.

At one time, Lima held the record for most career wins (89) by a pitcher with an ERA of 5.00 or greater. Sidney Ponson surpassed him in 2009 when he retired with 91 wins and a 5.03 ERA. There have been 25 different pitchers who put together a season with at least 16 losses and an ERA above 6.00: he is the only pitcher with two such seasons.

The brother of minor leaguer Joel Lima, Lima was known for his sunny disposition and his love of music. He once performed the national anthem before a Los Angeles Dodgers game and led a band which would perform at team functions. Each of his pitching starts was referred to by him as "Lima Time".

Lima died of a heart attack in Pasadena, CA, in 2010, at the age of 37. He was buried in his native Dominican Republic.