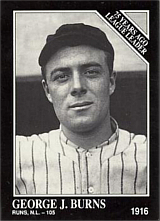 "I loved them all, but my special favorite was George Burns, the unassuming left fielder. I kept scrapbooks where I pasted everything written about my idol, and I probably fretted more than he did when he went hitless or failed to come through in the clutch." - Specs Toporcer, discussing his favorite New York Giants, in Lawrence Ritter's The Glory of Their Times

"George Burns! He is a marvel in every department of play, a superb fielder, a wonderful thrower, a grand batsman and with few peers in baseball history as a run scorer. Best of all, Burns, modest and retiring to an extreme, is the easiest player to handle that ever stepped upon a field." - John McGraw, asked who the best player he managed, after Christy Mathewson, was, by a sportswriter in 1918 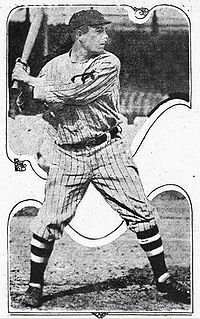 The star left fielder of the New York Giants throughout the 1910s, George Burns was one of the most consistent hitters in MLB history.

George was a patient hitter. He began a three year stretch of leading the senior circuit in walks with the aforementioned 1919 season, tallying 82, 76 and 80 from '19 to 1921. He scored plenty of runs over that stretch as well, while tallying a single season best 181 hits back-to-back in 1920 and 1921. On September 17, 1920, George hit for the cycle, going 5-for-5 with 3 runs scored and an RBI from his solo blast in a 4-3 victory over the Pittsburgh Pirates. Patrolling center field beginning in '21, George batted .299/.386/.395 as the Giants won another pennant. He shone in his first World Series victory, batting .333/.389/.515. It was to be his last. In the glow of the championship, Burns was peddled to the Cincinnati Reds for third baseman Heinie Groh. He enjoyed two solid seasons in Cincy, leading the senior circuit in walks with a career best 101 in 1923 while batting .274/.376/.375 in a league-best 154 games. But he tapered off in part-time action the next season and ended his big league ride with a season on the Philadelphia Phillies in 1925.

Burns played largely in an era with a depressed level of offense, only enjoying four seasons with the lively ball. All told, his .287/.366/.384 slash line holds up well for his era, especially when one considers he wielded a 52 ounce bat (!) through much of his career. He rapped 2,077 hits, scored 1,188 runs, roped 362 doubles and drew 872 walks. His 334 stolen bases as a Giant remained a club record until Willie Mays passed him prior to his moving to the New York Mets in 1972. During his career, over in the American League, an almost exact contemporary George Burns played first base for several teams. This George played 1,853 games entirely in the NL, "Tioga" George Burns played 1,866 games exclusively in the AL.

After his big league days, George was active in the minors for a bit. He played 163 games and hit .302 with Newark of the International League in 1926. He was player-coach of Williamsport in the NYPL in 1927 and 1928, joining Hanover briefly at the end of 1928 in the Blue Ridge League, with Springfield in the 1929 Eastern League (hitting .310 in 110 games) and lastly, San Antonio of the Texas League in 1930. He was a coach on McGraw's staff in 1931 and later moved to Gloversville, occasionally playing first base on semipro teams. Burns died in 1957 at 76.