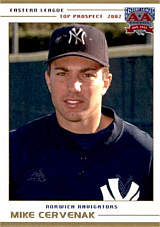 Moving to the Philadelphia Phillies in 2008, Cervenak batted .310/.331/.439 in 90 games for the Lehigh Valley IronPigs. Right before the All-Star break, he was added to the big club as an extra bat. He debuted in the bottom of the 11th inning of a 5-5 game against the Arizona Diamondbacks as a pinch-hitter for J.C. Romero. Facing Connor Robertson, he flied out to left field. Overall, he played 10 games for the Phils, going 2 for 13 with an RBI while mostly pinch hitting. The Phillies won the World Series, but Mike was not on the postseason roster.

Cervenak played for the Czech national team in the 2013 WBC Qualifiers. He was the team's top hitter, going 5-for-7 with a double, walk, run and RBI. He led all qualifiers in average (.132 over Scott Campbell and Leonardo Reginatto) and OBP (.058 over Ssu-Chi Chou), tied Adam Loewen for 6th in slugging and was 4th in OPS (between [{Aaron Altherr]] and Cheslor Cuthbert). At 39, he was back with the Czechs for the 2017 WBC Qualifiers. He again had a potent bat, at .462/.462/.615 with 3 runs scored and 4 RBI in three games. He led the team in average, was second to Jakub Malik in OPS and was 3rd in runs scored and RBI. He was second in the Mexico pool in average, behind Bruce Maxwell, led in hits and tied for 4th in RBI.