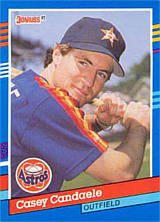 Casey Candaele did a little bit of everything but pitching and catching in a nine-year career, largely with the Montreal Expos and Houston Astros. His mother, Helen Callaghan, was one of the all-time great players in the AAGPBL, stealing over 350 bases in a five-season career. Casey's aunt, Marge Callaghan, was also an AAGPBL veteran.

Hot off the campus of the University of Arizona, where he was part of the school's 1980 College World Series triumph, Casey signed with Expo scouts Dick LeMay and Bob Oldis in August 1982. He was not considered much of a prospect, being an undrafted free agent, and first arrived in the majors in the middle of 1986 to replace an injured Andre Dawson. He collected his first hit on June 8th, a double against Dave Rucker of the Philadelphia Phillies, and ultimately batted .231 in a 30-game look, most of which took place in September. In 1987, he impressed manager Buck Rodgers with his hustle and ability to play multiple positions, making the team out of spring training as a utility player. The Expos were now without future Hall of Famers Dawson and Tim Raines, the latter being unable to sign until May 1st having been a victim of collusion as a free agent. This was all to Candaele's gain, as he impressed after rookie Alonzo Powell faltered after having originally been installed in Raines's spot as the lead-off hitter. Casey hit .317 in April and .318 in May, playing almost every day even without a set position. He filled in at second base, shortstop, center field, and elsewhere and quickly became one of the most popular players on the team.

Casey maintained his solid play into July, when he hit .317. On July 19th, he hit his first career home run (and only one as an Expo), against Rick Mahler of the Atlanta Braves. It tied a game the Expos went on to win, 2-1, and was a source of merriment among his teammates as the ball barely cleared the fence at the shortest point in Stade Olympique. Team management briefly painted the seat where it landed red, to mark the spot of the shortest home run in the ballpark's history, a joking reference to the yellow seat in the upper deck that marked where Willie Stargell had hit a monster home run in 1978. He had his first four-hit game on July 25th against the Cincinnati Reds. His hot hitting would not continue the whole season, however, as he faded down the stretch, with the Expos battling for the division title, and returned to a bench role. Still, he hit .272 in 138 games and was named to the 1987 Topps All-Star Rookie Team at second base.

In 1988, Candaele was slated to platoon at second base with the left-handed hitting Tom Foley, but he hit only .172 in 36 games, was demoted to the minors and, on July 23rd, was traded to the Houston Astros for catcher Mark Bailey. He did not get off to a roaring start deep in the heart of Texas either, batting only .161 in 21 games before moving to the Triple A Tucson Toros, where he remained until the 1990 season. He responded well to the Astros plug and play approach, hitting .286 in 262 at bats while coming on late, routinely in the outfield or at second base. He did fairly well in his most on-field action in 1991, making 95 starts at second base while playing 151 total games and hitting .262 with 4 home runs and 50 RBI. His bat could not keep up in 1992, hitting just .213 in 320 at bats, and he became a free agent after a 75-game stint in 1993. He returned to the bigs very briefly in 1996 and 1997 as a bench player with the Cleveland Indians. In 754 career games, he hit .250 with 11 home runs and 206 runs scored.

Candaele was the Texas Rangers' minor league infield and baserunning coordinator from 2011 to 2014, and was the team's field coordinator in 2015. In 2016, Candaele was named first base coach of the Seattle Mariners under first-year manager Scott Servais, who had been his teammate with the Astros from 1991 to 1993. He became a manager with the Dunedin Blue Jays in 2018 and Vancouver Canadians in 2019.