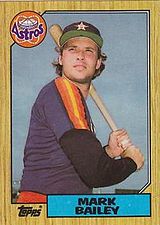 Bailey attended Southwest Missouri State University, where he hit .369 with 22 home runs over three years primarily as an infielder, and appeared in the 1982 Division II College World Series. He also played basketball, averaging 9.6 points and 5.5 rebounds per game as a sophomore. He was taken by the Houston Astros in the sixth round of the 1982 amateur draft and made his pro debut that summer with the Auburn Astros, hitting .300 with 11 homers in 65 games. Converted to catcher in 1983, he hit .263 with 19 homers for the Asheville Tourists.

After beginning 1984 with the Double A Columbus Astros, Bailey was called up to the bigs in late April when Alan Ashby was injured. He made his debut April 27th against the Atlanta Braves and got his first start two days later, going 2-for-4 against Atlanta. On September 16th against the San Diego Padres, he homered from both sides of the plate. Overall, in 108 games as the regular backstop, he hit .212 with 9 home runs. The following summer, in 1985, he improved to a .265 average and 10 homers, and was behind the plate for Nolan Ryan's 4,000th career strikeout. He struggled in 1986, hitting just .176 before losing his job to Ashby and being sent to the minors. He saw some big league action with Houston each of the next two summers and, midway through the 1988 campaign, he was dealt to the Montreal Expos for Casey Candaele.

Bailey never played in the majors for Montreal, spending the rest of the season with the Triple A Indianapolis Indians. The following spring, he was traded to the New York Mets, along with Tom O'Malley, in return for Steve Frey, and he played all of 1989 with the Tidewater Tides. He became a free agent and signed with the San Francisco Giants late that year. Over the next three summers, he got into 18 games for San Francisco, seeing most of his playing time with the Phoenix Firebirds. He was out of pro ball in 1993 but played in the independent Texas-Louisiana League the next two seasons.

Following his playing days, Bailey was a coach for the Kissimmee Cobras in 1998, the Jackson Generals in 1999, and the Round Rock Express in 2000 and 2001. From 2002 to 2009, he was the Houston Astros' bullpen coach. He was hitting coach of the Corpus Christi Hooks in 2010 and filled the same role with the Tri-City Valley Cats in 2011 and 2012. In 2013, he rejoined the Hooks staff. In 2015, he was a roving catching instructor for the Astros and was named the Astros' Minor League Catching Coordinator for 2016.