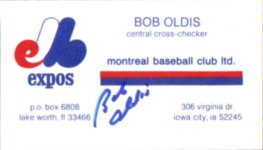 Bob Oldis made his major league debut with the Washington Senators in 1953. He appeared in 24 games with the Senators in the three-year span of 1953-1955. He spent the entire seasons of 1956 to 1959 in the minors during which time his contract was sold to the New York Yankees in October 1956. The Pittsburgh Pirates selected Oldis from the Yankees in the November 1959 Rule V Draft.

Oldis opened the 1960 season as one of four catchers on the Pirates' roster, along with Smoky Burgess, Hal Smith and Danny Kravitz. Kravitz was traded in June, and the Pirates carried three catchers the remainder of the season. Manager Danny Murtaugh platooned Burgess and Smith throughout the season while usually holding Oldis in reserve. Oldis started only 3 games all season (each when Tom Cheney was the starting pitcher), and appeared in 19 others as a late-inning defensive replacement. He had no pinch-hit appearances and batted only 20 times (with 3 singles and a double for a .200 average) despite being with the Pirates the entire season. But Oldis was the Pirates' best defensive catcher and his sense of humor helped keep the team loose during the pennant chase. He appeared in 2 games in the 1960 World Series, replacing Burgess behind the plate in the bottom of the 9th inning in the Pirates' 3-2 win in Game 4 and again in the bottom of the 9th of the Pirates' 5-2 win in game 5. Oldis did not bat in the Series. He appeared in 4 games in 1961 for the Pirates, spending the remainder of the season at AAA Columbus.

His contract was sold to the Philadelphia Phillies in October 1961. Oldis received the most playing time of his major league career as a reserve catcher for the Phillies in 1962 and 1963, hitting .242 in 165 at-bats during that two-year period including 18 of his career 22 RBIs and his only major league home run on August 9, 1962 against Pete Richert of the Los Angeles Dodgers.

After his playing career ended, Oldis was a Philadelphia Phillies coach under manager Gene Mauch from 1964 to 1966, a Phillie scout in 1967, and a member of the Minnesota Twins staff in 1968. He was one of the original coaches of the expansion Montreal Expos the next season (1969), when he reunited with Mauch, then served as a scout for the team for a number of years. He managed the Watertown Expos in 1971.

As of 2007, Bob worked as a scout for the Florida Marlins. He was recently inducted in the State of Iowa Hall of Fame. In the minors, Bob hit two home runs in one inning once. He also once threw out Maury Wills trying to steal second base twice in one inning.