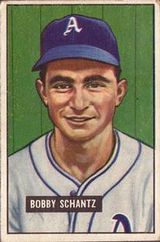 Bobby Shantz, the brother of Billy Shantz, was a terrific-fielding lefty who excelled both starting and relieving during a 16-year major league career. The 1952 AL MVP on the strength of a huge 24-7 season, he completed a remarkable 27 games out of 33 started for one of the worst teams in baseball. Amazingly, he excelled despite his diminutive stature of 5' 6", 139 lbs.

Shantz graduated from Pottstown High School and entered the Army as a 109-pound recruit in 1944. He served in a motor outfit in the Pacific with the 25th Chemical Division and the 86th Infantry and was in the Philippines for 16 months. He worked for Disston Saw Works and Exide Battery Plant stateside after the War, before being signed by Harry O'Donnell of the Philadelphia Athletics (TSN 6/2/48) in the Spring of 1948. After just one season for the Class A Lincoln A's, where he led the Western League in wins and strikeouts, he was promoted to the big league club in 1949.

Six years later, then a member of the Kansas City Athletics, Shantz was converted to a reliever for a season before being dealt to the perennially World Series-bound New York Yankees in 1957. He found immediate success there as a spot starter and reliever, going 11-5 and leading the American League both in ERA (2.45) and ERA+ (148). He appeared in two Fall classics (1957 and 1960) during four sterling years in the Bronx before being plucked as the first selection by the Washington Senators in the 1960 expansion draft. He was traded to the Pittsburgh Pirates for Bennie Daniels, Harry Bright and R.C. Stevens without ever appearing in a game for the Senators.

On April 10, 1962, Shantz started for the Houston Colt .45s in the first game in franchise history. He pitched and won an 11-2 complete game victory over the Chicago Cubs. It was the only game he ever won for the Colt .45s.

In all, Shantz pitched in 537 major league games from 1949 through 1964 for seven different teams. He was considered the greatest fielding pitcher of his time, winning 8 consecutive Gold Glove Awards from 1957 to 1964 despite being primarily a relief pitcher. He likely would have won more had they been awarded prior to 1957.