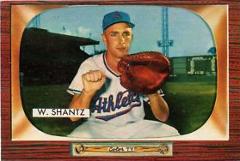 Billy Shantz served in the Navy during World War II and had worked apprenticeship training as a machinist for SKF before being signed along with his brother Bobby Shantz by the Philadelphia Athletics in 1948. He played first with the Moline A's and Kewanee A's in the Class C Central Association. He was a catcher for 131 major league games for the Athletics in 1954, the Kansas City Athletics in 1955 and the New York Yankees in 1960. When Billy wound up his time in the major leagues, he had hit for a .257 average and fielded his catcher's position at a .984 percentage. He also threw out 57 percent of prospective base-stealers during his limited three-year ML career - an amazing statistic for any catcher.

Billy spent 14 seasons (1948-1966) in the minor leagues and six of those came before his term with Philadelphia in 1954. Four of those years (1949-1952) were spent with the Lincoln A's of the class A Western League, where he hovered around the .240 hitting mark. After his 1955 term with Kansas City, he spent the majority of his time with the Richmond Virginians of the International League. Billy finished up his playing time in 1962 with a minor league career average of .242 while appearing in 1,182 games. Billy also showed a fine .991 percentage while fielding the catcher's spot.

After his active playing career was over and as a lot of good baseball men do, Billy tried his hand at managing, handling the Shelby Colonels of the class A Western Carolinas League in 1963. Shantz was also at the helm of the Fort Lauderdale Yankees of the class A Florida State League for three seasons, (1967-1969).

Billy was in the sporting goods business for 30 years in Fort Lauderdale, FL. He passed away December 13, 1993, at the age of 66 in Lauderhill, FL.

His brother Bobby reminisced about his late brother: "My dad would bring Billy and I from Pottstown to Philadelphia on a Sunday to see a doubleheader. We'd leave at 7:00 A.M. and stop at Fairmount Park in Philadelphia where he would hit ground balls and pop flies to Billy and me."

"In the big leagues, on occasion we were battery mates, especially in Kansas City in 1955. That was Billy's most active season when he played in almost 80 games and hit .258. One game I shut out the Yankees 6-0 with Billy catching. That was the best game we ever worked together. I didn't pitch to Bill much."