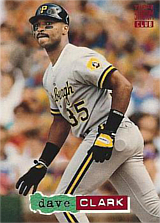 Dave Clark was not affiliated with the Dave Clark Five. But he was a two-time MVP of the Jackson State baseball team and a college All-American who was a first round pick of the Cleveland Indians and delightfully named scout Red Gaskill in 1983. Dave was a spare part outfielder over parts of thirteen seasons, seeing much of his action with the Pittsburgh Pirates teams of the mid-1990s. In 110 games in 1993, Dave hit .271/.358/.444 with 11 home runs, following that up with his strongest line (.296/.355/.489) and 10 home runs in 86 games in the strike-shortened 1994. He saw postseason action in two of his final three seasons, capping his career with two walks in two trips to the plate for the Houston Astros in the 1998 NLDS.

Dave became a coach with the 2000 GCL Pirates until midseason, then was a coach with the Nashville Sounds. In 2001 and 2002, he was hitting coach of the Pirates. He was interim manager of the Astros for the last two weeks of the 2009 season, replacing the fired Cecil Cooper. He stayed with the club as third base coach under manager Brad Mills from 2010 to 2012, then moved across the diamond to first base coach when Bo Porter was hired to manage in 2013. In 2014, he moved to the Detroit Tigers as third base coach under newly appointed manager Brad Ausmus. In 2020 he moved across the diamond to become their first base coach, but was dismissed at the end of the season along with most of the team's coaches.