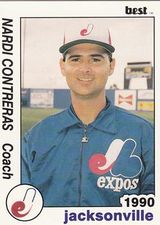 Nardi Contreras navigated a long and winding road to the bigs, pitching in the Cincinnati Reds, New York Mets and Philadelphia Phillies organizations before receiving his chance with the Chicago White Sox in 1980. He pitched eight games throughout the '80 season as the Sox managed to lose every game he appeared in, though he did not record a decision. His best outing came on October 1st when he pitched 1 2/3 innings against the Oakland A's, giving up no hits, no runs and striking out 2. It was his only outing in which he did not give up a hit. He gave up one home run in his career, to Jim Anderson of the Seattle Mariners. In 1989, Contreras played for the St. Petersburg Pelicans of the Senior Professional Baseball Association.

He began his coaching career as the pitching coach of the Edmonton Trappers in 1982. After two years with the Glens Falls White Sox, he moved up to the AAA Buffalo Bisons for the 1985 season. In 1986, he began a two-year stint with the GCL Braves. He moved on to the Montreal Expos, becoming the pitching coach for AA Jacksonville Expos from 1988-1990, Indianapolis Indians in 1991 and Columbus Clippers in 1994. Contreras was later a coach with the New York Yankees in 1995. He was part of the Seattle Mariners staff in 1997 and 1998 and a White Sox coach from 1998 to 2002. In 2005, he returned to the Yankees as minor league pitching coordinator. It was Contreras who developed the "Joba Rules" for Joba Chamberlain.