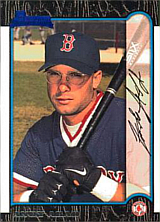 Andy Abad was drafted in the 16th round (443rd overall) in the 1993 amateur draft by the Boston Red Sox. He made a handful of big league appearances in parts of three seasons.

A fair power, fair speed player with a strong eye at the plate, Abad started out with the GCL Red Sox in 1993. His professional career started off a little bumpy - he hit only .248 in his rookie season. The next year, 1994, he jumped to Single A Sarasota Red Sox, where he saw some success. His average jumped 40 points from .248 to .288. He remained in Sarasota through part of 1995, where he then jumped to Double A Trenton Thunder. His average plummeted to .240 that year. He was sent back to Sarasota in 1996, but he did not stay long. After hitting .287, he was again called up to Trenton, and this go around was much more successful. He hit .277 and between both levels had his first 10-plus steal season, swiping 15 bags. In 1997, Abad only played 45 games, all with Double A Trenton. He hit .303 that year, the first of multiple .300-plus seasons.

In 1998, Abad really showed what he could do. He started out with Triple A Pawtucket Red Sox and made the best of his time there. He experienced his first double digit home run season, slugging 16 while batting .307. The next year - 1999 - was also successful; he stole the same amount of bases as in 1998 and hit 15 home runs. His average was not as lofty, but still not disappointing: he hit .297. On October 15, 1999 Abad was released. Anybody could have retired, but he wanted to play baseball. So he went overseas, and played in Japan with the Kintetsu Buffaloes in 2000. He was atrocious for Kintetsu, hitting just .163/.235/.304 in 32 games before being let go and signed by the Oakland Athletics.

Abad returned to the minors. There, he had perhaps the best season of his minor league career with the Triple A Sacramento River Cats, batting .301 with 19 home runs and hit .529 during the 2001 PCL playoffs. He made his MLB debut in 2001, playing in one game and went 0 for 1 in one plate appearance as a pinch hitter for Jeremy Giambi. He may have not produced in his first at bat, but he did not strike out.

After seeing Abad spend the majority of his nine year professional career in the minors or overseas, and getting only one chance to play in the majors, one might begin to think Andy was a bad player. But statistics would say otherwise: he hit over .300 five times, walked more than struck out three times, and hit over 15 homers three times. These impressive statistics could not keep him in the Athletics system. He was granted free agency and picked up by the Florida Marlins.

One would expect Abad to be wearing down at this point in his career. However, with the Triple A Calgary Cannons in 2002, he hit 11 home runs and had a .301 average, but again was granted free agency. And again, he was signed by Boston. Not surprisingly, he started the season in the minors with Triple A Pawtucket. While there, he hit .304 with 13 homers. He was a Triple A and Baseball America All-Star that year. He got the chance to play for more than one week in the major leagues this time, appearing in 9 games with Boston, getting 17 at-bats. He could not translate his minor league success into the majors, as he hit only .118. And not surprisingly, he was granted free agency. He was picked up by the Pittsburgh Pirates. In 2004, Abad hit .292 with 15 homers in the Pirates' minor league system. He was then released and picked up by the Cleveland Indians. He played the 2005 season with the Triple A Buffalo Bisons, hitting .293 with a career high 20 home runs. He was named co-MVP of the Bisons along with Ryan Garko.

In 2006, he was on the Cincinnati Reds Opening Day roster. In 5 games, he went 0 for 3. In 2007, he played for the Nashville Sounds, the Pacific Coast League Triple A affiliate of the Milwaukee Brewers. Abad signed with the Pericos de Puebla of the Triple A affiliated Mexican League for 2008. After playing 30 games for the team, they released him in late April. He served as a coach with the Yakima Bears in 2009-2010 and Visalia Rawhide in 2011.

He primarily wore number 30 in the majors. Currently, he lives in Jupiter, FL. His father escaped Cuba during the Fidel Castro revolution.