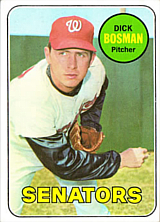 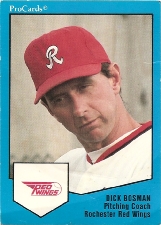 "Those were the days when you lost, it was the end of the world. That's the way I was from the first day I ever put on a baseball glove. Back then it was all right to break a helmet or fire a bat or go nuts, because that's why you were out there, to win that ball game. I'll be a son of a bitch if you lost. Maybe I was wrong, but that's the way I felt. And I still feel that way." - Dick Bosman, to Peter Golenbock, in the book The Forever Boys

Dick Bosman started the final game the "new" Washington Senators, on September 30, 1971, played before the team relocated to become the Texas Rangers. A highly competitive control pitcher who told teammates: "If you don't hustle when I'm pitching, I'll kick your ass," Bosman was 14-9 with an American League-best 2.19 ERA for the Senators in 1969. He won a career-high 16 in 1970, and, on July 19, 1974, no-hit the Oakland Athletics while with the Cleveland Indians, losing a perfect game on his own throwing error. Bosman won 11 to help Oakland to a division title in 1975, but the A's cut him in 1977. He made his only postseason appearance with the A's against the Boston Red Sox in the 1975 ALCS; he pitched a third of an inning in relief. In 1989, Bosman played for the St. Petersburg Pelicans of the Senior Professional Baseball Association. He went 1-1 with a 4.07 ERA for the club.

Bosman is the second cousin of Duane and Glen Kuiper.