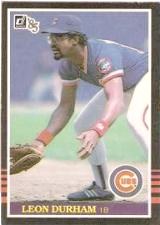 Leon Durham played a decade in the majors and was a two-time All-Star. Since his playing days, he has been a longtime minor league and major league coach.

Durham was selected by the St. Louis Cardinals in the first round of the 1976 amateur draft with the 15th overall pick. He reached the majors with the team in 1980, hitting .271 with 8 home runs while mostly seeing action in the outfield. After the season, he was dealt along with Ken Reitz to the Chicago Cubs for future Hall of Famer Bruce Sutter.

Durham became the regular in right field for the Cubs in his first summer in Chicago, in the strike-shortened 1981 season, hitting 10 homers. In 1982, he had perhaps his finest big league season, hitting .312 (third in the National League) with 22 home runs and 28 stolen bases, while being named to the All-Star and Silver Slugger teams. After another All-Star season in 1983, he replaced Bill Buckner as the Cubs' first baseman in 1984. He hit 23 homers and recorded a career-high 96 RBI as Chicago won the NL East title, reaching the postseason for the first time in almost forty years. He clubbed a pair of home runs in the NLCS but made a key error in Game 5, as his club ultimately fell to the San Diego Padres.

Durham hit over 20 home runs for the Cubs in each of the next three seasons, hitting a career-best 27 in 1987. Following a slow start in 1988, he was traded to the Cincinnati Reds for pitcher Pat Perry, but he ended up missing much of that season while in drug treatment. Released by the Reds after that year, he returned to the Cardinals, but he again missed much of 1989, his final big league campaign, due to a drug suspension.

After his major league career, he played with the St. Paul Saints of the independent Northern League and paced the circuit with 11 home runs in 1993.

Durham has been a minor league coach since 1995, starting as a player/coach with the Vancouver Canadians and becoming a full-tine coach with the 1996 Lake Elsinore Storm. He coached with the Canadians in 1997 and 1998, and the Edmonton Trappers in 1999 and 2000. Moving from the California Angels organization to the Detroit Tigers, he was the hitting coach for the Toledo Mud Hens from 2001 to 2016. In 2017, he received his first major league coaching assignment as assistant hitting coach of the Detroit Tigers, but was dismissed along with some other members of the coaching staff when Brad Ausmus was fired after the season. He was then hitting coach of the Louisville Bats in 2018-2019 and was scheduled to return in 2020 before the season was cancelled due to Covid-19. Durham also served as the hitting coach for the 2002 Mesa Solar Sox of the Arizona Fall League.

Away from the diamond, Durham appeared in the 1994 movie Little Big League.

Durham's son Lance Durham signed with the Toronto Blue Jays as a 14th round pick in the 2009 amateur draft.

Durham has some international coaching experience as well. Leon coached for Team USA in the 2010 Pan American Games Qualifying Tournament, 2011 Baseball World Cup and 2011 Pan American Games. He was also the hitting coach for the Navegantes del Magallanes of the Venezuelan Winter League during the 2015/2016 season.