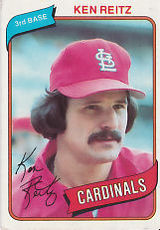 Ken Reitz was one of the best-fielding third basemen of his era but also one of the slowest runners in baseball. Playing most of his career with the St. Louis Cardinals, he put up decent offensive stats with a .260 lifetime batting average, although with few walks and little power, and was always overshadowed by contemporary Mike Schmidt. He was known for hitting extremely well in April, and fading as the year progressed.

He made his major league debut on September 5, 1972, starting at third base against the Montreal Expos; teammate Mike Tyson also made his debut that day, starting at second base. The two would anchor the Cardinals' infield until the end of the decade, except for the 1976 season, which Reitz spent with the San Francisco Giants.