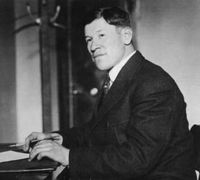 "You, sir, are the greatest athlete in the world." - Swedish king Gustav V at the 1912 Olympics to Jim Thorpe 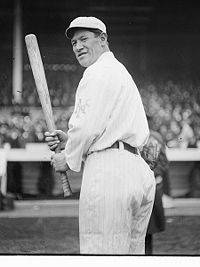 The double Olympic medalist Jim Thorpe was signed by John McGraw as a publicity stunt in 1913, although he had some minor league baseball experience. Thorpe was a steadily improving ballplayer over six major league seasons, hitting .327 in his last year, and having a lifetime OPS+ of 99 (where 100 is average). He disagreed with McGraw's assessment of him and was sold to the Cincinnati Reds in 1917. He was later that year returned to the Giants and technically appeared briefly in the 1917 World Series (he was lifted for a pinch-hitter in the first inning after the opposing team changed pitchers to one who was a righty).

Thorpe's most famous baseball feat was driving in the only run in the famous Hippo Vaughn and Fred Toney double no-hitter in 1917.

With the Boston Braves in 1919, Thorpe was the team's top hitter. His .327 batting average was well above the .292 hit by the top regular on the team, Walter Holke. His .429 slugging percentage beat all the regulars (Joe Riggert had a .408) and was second only to the .441 posted by Les Mann in slightly fewer plate appearances than Thorpe had. The league's top batting average that year was Edd Roush's .321, so Thorpe would have won the batting title if he had had enough plate appearances to qualify.

Ironically, Thorpe was stripped of his Olympic gold medals, earned at the 1912 Stockholm Olympics, where he was the undisputed star of the games, because of baseball. He was declared a professional for accepting $60 a month to play baseball in the summers of 1909 and 1910. The medals were restored in 1983.

Thorpe was voted as the best male athlete of the first half of the 20th Century. Babe Didrikson, who also dabbled in baseball, was voted the top female athlete in the same poll.

Although well past the age for military service, Thorpe volunteered during World War II and served on an ammunition ship for the Merchant Marine in 1945. He received a credit as an actor in Buster Keaton's 1935 baseball-themed movie, One Run Elmer and had bit roles in various other movies, especially westerns.

When he was at the Carlisle Indian School, he once played baseball against Dwight Eisenhower. One of his teammates was NFL Hall of Famer and minor league outfielder-manager Joe Guyon.

Thorpe had a twin brother who died at age 8.