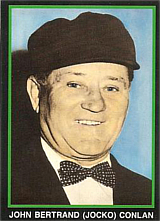 “He was a master psychologist in the charged-up world of the baseball diamond, knowing when to cajole, when to rebuff, and when to ignore. He knew the rules as well as any umpire but he also used the feel of the rules as they applied to plays and players.” - The Sporting News

Jocko Conlan was a Hall of Fame umpire who dabbled as a player, seeing action as an outfielder in two seasons with the Chicago White Sox.

Conlan played most of his career in the upper minors. At 34, he was going to retire but the White Sox needed him in 1934 due to injuries to their outfielders. He got into 128 games with the White Sox, batting .263 with 55 runs scored. During his minor league career, he was known as "John Conlan."

He got his start as an umpire in 1935 when Red Ormsby suffered heat prostration during a doubleheader in St. Louis. Conlan was sitting out with a sprained thumb and officiated the second game in his White Sox uniform. Conlan went down to the New York-Penn League as an umpire from 1936 to 1937, then served in the American Association from 1938 to 1940. He worked in the National League from 1941 to 1965 (serving 15 games as a substitute umpire in 1965 after retiring at the end of the 1964 season). In his career, he worked five World Series and six All-Star Games. He was best known for his trademark bowtie and using his left hand, instead of his right, to make out calls. Jocko was the last NL umpire to use the outside chest protector and was inducted into the Hall of Fame in 1974.

He got his nickname from a player named Jocko Conlon. Conlan was often confused for Conlon. This Jocko's son, John, went to Harvard Law School, was a college professor and served as an Arizona Congressman in the 1970s. Jocko passed away in 1989, with the book Jocko, by him and Robert W. Creamer, appearing in 1997. It was either based on or a reproduction of a book that appeared in the 1960s.