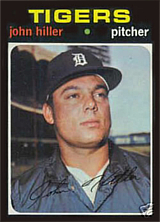 "I go at this game with a little different attitude than I used to. Before my sickness, I was more uptight every time I pitched. I used to get nervous warming up. Now I don't worry about tomorrow. If I do well, I do well. If I don't – well, there'll aways be another day." - John Hiller, 1972

Pitcher John Hiller played fifteen seasons in the majors, all with the Detroit Tigers. He suffered a heart attack as a 28-year-old but came back to become one of baseball's top relievers. He is the uncle of Andrew Baldwin.

After several seasons playing amateur baseball in Toronto, Canada, Hiller was signed by the Tigers in 1962. As a good Canadian, he also played hockey in his youth, as a goaltender, before turning to baseball full time. He made his pro debut the following summer with the Jamestown Tigers of the New York-Penn League, for whom he went 14-9 with 172 strikeouts. He reached the majors in September 1965 and was in the big leagues for good by 1967. Primarily used out of the bullpen, he made occasional starts for the club and threw back-to-back shutouts on August 20th and August 25th, 1967.

In 1968, Hiller started a career-high 12 games, and on August 6th, he set a big league record when he struck out the first six batters in a game against the Cleveland Indians. Later that month, he recorded a one-hit shutout of the Chicago White Sox on August 20th. He also appeared out of the bullpen in two games of that year's World Series, in which the Tigers beat the St. Louis Cardinals. He mostly appeared as a reliever the next two years, but in one of his spot starts, on the final day of the 1970 campaign, he threw a two-hitter against the Indians and struck out seven straight during the game to tie an American League record.

Prior to the 1971 season, Hiller suffered a heart attack, and he did not play at all that summer. He underwent a stomach bypass surgery and lost a considerable amount of weight in getting back into shape. The Tigers, convinced his playing days were over, released him and brought him back as a minor league pitching instructor. While teaching youngsters, he also learned to throw a change-up to complement his fastball and slider. The Tigers took him on as a batting practice pitcher, and by July of 1972 he was back on the roster, because the team was short of arms with injuries to Les Cain and Fred Scherman. Hiller made 24 regular season appearances, recorded 3 saves, and earned a win in Game 4 of the ALCS against the Oakland Athletics. In 1973, he pitched in 65 games and saved 38 of them, best in the AL that year and a major league record at the time. His honors that season included Fireman of the Year and American League Comeback Player of the Year, and he finished fourth in both Most Valuable Player and Cy Young Award voting.

Hiller recorded an AL-record 17 relief victories in 1974 while saving 13 games for Detroit. The next summer, he notched 14 saves before suffering a season-ending injury in late July. He won 12 games and saved 13 in 1976 and made his first start in four years on October 1st, hurling a four-hit shutout against the Milwaukee Brewers. In 1977, he recorded 7 saves as well as making 8 starts, including a 12-strikeout outing versus the Toronto Blue Jays on June 14th. After recording 15 saves in 1978, Hiller's save total dropped to 9 in 1979. He made 11 appearances for Detroit in 1980 before retiring.

Hiller was pitching coach of the Glens Falls Tigers in 1986 and Toledo Mud Hens in 1987.

Following his baseball career, Hiller worked in an insurance business in Duluth, Minnesota. He was inducted into the Canadian Baseball Hall of Fame in 1985.