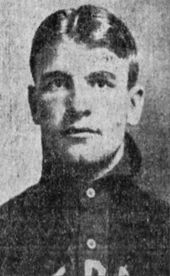 "Herman Bronkie has become one of the most valuable men on the Waterbury team. His batting and fielding help a lot." - Sporting Life, June 15, 1907

"Herman Bronkie is pulling off wonderful feats at the third corner every day. He has the class." - Sporting Life's Toledo correspondent, July 5, 1913 issue

Herman Bronkie appeared in the major leagues in parts of seven different seasons from 1910 to 1922. He was with the Toledo Mud Hens from 1911 to 1913 and coached at Trinity College in 1920. He was with the Cleveland Naps in 1911 when Joe Jackson played his first full major league season; Bronkie was five years older than him. He was also with the 1918 St. Louis Cardinals and was eleven years older than Rogers Hornsby. Finally, he was still playing at age 37 with the 1922 St. Louis Browns, where he was eight years older than teammate George Sisler. In 122 career games, Herman batted .241 with one home run, belted off Jack Coombs on July 27, 1918.