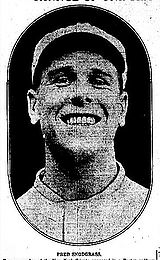 "(There is) hardly a day in my life, hardly an hour, that in some manner or other the dropping of that fly doesn't come up, even after 30 years." - Fred Snodgrass in 1940

Fred Snodgrass, although he played nine seasons in the major leagues, is forever remembered as the player who dropped a fly ball in extra innings of the last game of the 1912 World Series, allowing the Red Sox batter to get on base and later score to tie the game. That play is sometimes called the "Snodgrass muff." He spent most of his career with the New York Giants as an outfielder and sometimes first baseman. He played in three World Series, but was always on the losing side.

In his best major league season with the bat, 1910, he was second in the National League in OPS+.

Snodgrass was born in Ventura, CA in 1887 and he later became mayor of Oxnard, CA. He was a successful businessman, banker and rancher after his baseball days.

The only other Snodgrass in the majors (through 2008) has been Chappie Snodgrass.