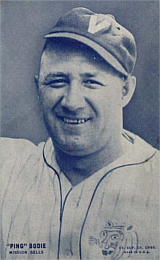 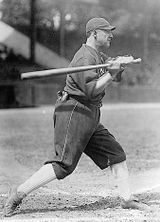 "Philadelphia now has only two attractions left—the Liberty Bell and myself." - Ping Bodie (after learning that Connie Mack had just dealt Stuffy McInnis to Boston), 1918

Ping Bodie, who played nine seasons in the majors, was the first player in the history of the Pacific Coast League to hit 30 homers in a year, doing so in 1910.

Born in San Francisco, Bodie was one of the earliest of a long line of Italian players from the Bay Area. His real name was probably Francesco Stephano Pezzolo, although his brother claimed his original name was Franceto Sanguenitta Pizzola. He was called "Ping" from the sound of the ball coming off the bat, and was called Bodie either from the name of a town in which he had once lived or from an uncle. Ping was a fun-loving guy who was usually the center of attention.

Ping started in the minors in the California League, and was with the San Francisco Seals from 1908 to 1910, returning from 1915 to 1916 during a break from the bigs, and again in 1927 and 1928 after his big league time. Following his robust PCL season in 1910, when he batted .263 with 69 extra base hits in 212 games, he was selected by the Chicago White Sox in a draft on September 1st. He spent the next four seasons with the Pale Hose, 1911 to 1914. In the first three years, his batting average was above the American League average as averages in general plummeted, but he fell off a production cliff the final season, batting .229 with only 17 extra base hits in 107 games. He returned to San Francisco before being dealt to the Philadelphia Athletics in 1917. That year, he hit .291 with 11 triples and 7 home runs. Those 7 home runs were third in the league, and he additionally finished sixth in slugging and RBI.

The Athletics flipped Bodie to the New York Yankees prior to the 1918 season, where he spent the rest of his career. Bodie was an average hitter from 1918 to 1920, but in 1921, when he slumped below .200, he was dealt to the Boston Red Sox in August, never to report and ending his big league days. At one time, he was the roommate of a new acquisition by the club, a newly minted outfielder by the name of Babe Ruth.

Bodie joined the Tietjen and Long Drydock Company of New Jersey with teammates Ray Caldwell and Hank Thormahlen in 1918. During World War I, a number of players joined such companies and were thus able to avoid the military draft. Both the shipbuilding and steel industries had baseball teams and were considered "essential services", vital to the allied war effort. They had what were considered "soft jobs" and players often earned $500 a week, representing their companies on the ball field.

After his major league career, from 1921 to 1928, he was back in the minors. In 1,050 big league games, Ping batted .275. His minor league batting average was .310 in 1,787 games, with 203 home runs. After baseball, Bodie developed a whole new career for over 30 years as an electrician and sometime actor in the movie industry in Hollywood. He liked to ham it up for fans who remembered him, saying things like "Give me the mace and I'll drive the pumpkin down Whitey Ford's throat." He is also known for the time he competed against an ostrich in a pasta-eating contest in spring training - and won!

He was portrayed by actor Frank Marrero in the 1992 movie "The Babe". A member of the Italian American Sports Hall of Fame, he died of cancer at 74.