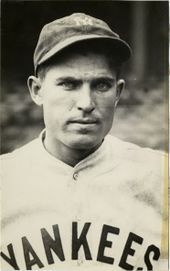 "Koenig is destined to become one of the finest shortstops in the majors." - Yankees manager Miller Huggins in May 1927 about his 22-year-old shortstop

Mark Koenig was the starting shortstop for the 1927 Murderers' Row Yankees club. He was the last living player from the team to have played in a game. (Joseph Styborski, who rode the Yankee bench for a few weeks that summer and only pitched in exhibition games, outlived him. Bill Werber, who was cut from the team in spring training, survived until January 2009).

Koenig played 12 seasons in the majors, only half of which were for the Yanks. He played for the Yankees from 1925 to part of 1930, and for other major league teams through 1936. He was on World Series teams with the 1932 Chicago Cubs and the 1936 New York Giants in addition to the three he was in with the Yankees.

Mark was born in San Francisco, CA and attended high school there. He was already playing minor league ball at the age of 16 in 1921. After playing two years for St. Paul in 1924-25 (and appearing in the Little World Series in 1924), he was acquired by the 1925 New York Yankees and made his debut for them in September 1925. He was two years younger than Lou Gehrig and nearly two years older than the youngest player on the team, Hank Johnson.

In May 1930 he was traded to the 1930 Detroit Tigers, and in 1930-31 he actually pitched five games along with playing shortstop and second base. In 1930 he formed the double-play combo with Charlie Gehringer while in 1931 he filled in for Gehringer during part of the season due to Gehringer's arm injury.

Koenig had eyesight problems during this period, and had an operation to deal with it. The Tigers had thought he needed glasses.

The Tigers sold Koenig to Mission of the PCL in April 1932, and he spent most of 1932 with the minor league team, hitting .335 at age 27 (and pitching four times). Except for Ox Eckhardt, Mark was the top hitter on the team in terms of batting average. Playing part of 1932 for the 1932 Chicago Cubs, he continued his hot hitting, batting .353 in 33 games. In the 1932 World Series he faced his old teammates, the Yankees.

He stayed with the Cubs in 1933 and then was traded in the off-season to the Philadelphia Phillies along with others for Chuck Klein. A month later he was traded again, this time to the Cincinnati Reds, for whom he became an everyday player in 1934, appearing in 151 games, the most he ever appeared in one major league season.

After the 1934 season he was traded to the New York Giants and he finished out his major league career with them. His last major league appearance was as a pinch-hitter and second baseman in the final game of the 1936 World Series against the Yankees.

After his playing days he owned a couple of gas stations in San Francisco and worked at a brewery. Late in life he lived north of Sacramento.