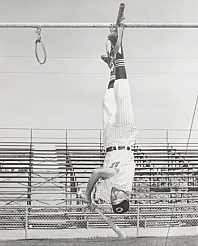 Price served in the U.S. Army as a TEC 5 during World War II (824 ORD DEPOT CO ORD DEPT)(BN/CM/VA). Upon discharge, he played for the Columbus Senators in the American Association (1944-1945), the Milwaukee Brewers in the American Association (1945) and the Oakland Oaks of the Pacific Coast League (1946). Signed by Bill Veeck of the Cleveland Indians as an amateur free agent, Price was 33 years old when he broke into the big leagues on August 18, 1946, with Cleveland.

A shortstop, he played in 7 games and had three hits for the Indians, where he played his final game on September 20, 1946, ending his playing career at age 33. To make it official, the Indians released him on September 30, 1946, only to re-sign him as a "coach". Overall in the minors, he had 6 home runs and 89 RBI.

If that was all there was to it, this wouldn't be much of a story. But after languishing for nearly a decade in the minor leagues, Price recognized that his dreams of big league stardom might never be realized. At that point he decided to develop trick catches and special routines that would allow him to stay in the game of baseball. In the Pacific Coast League in the late 1930s, Price started to establish a following and began performing his tricks before games as the crowds filed in.

In contrast to other baseball entertainers who relied on comic routines to draw laughs, Price used his amazing baseball skills to delight fans. One of Price's most famous tricks was to hang upside down and take batting practice for 15 minutes or more. Batting either left-handed or right-handed, Price could hit fast pitches from opposing pitchers while suspended from the backstop or a pole while being suspended upside-down from his ankles.

He also would perform a trick that would remind one of the old tale of David and Goliath, hurling a baseball out of the stadium, using a sling. Some of his stunts included his shooting a baseball out of an air gun and then jumping into a jeep and speeding into the outfield to catch the plummeting sphere. He would amaze fans by pitching two balls at one time, one a curve and the other a fastball, and batting two balls with a fungo bat at the same time, sending them in opposite directions.

Price could also catch baseballs between his legs, behind his back, and even in the neck of his uniform shirt. A popular Price maneuver was to throw three baseballs with one hand and have each of them land in a different catcher's mitt in the strike zone. He could also hold three baseballs in his throwing hand and toss them in one motion to three different players stationed around the infield.

And thus he became the "Clown Prince of baseball" between Al Schacht and Max Patkin. All you need to know about his zaniness is that he was once ordered off a train by Cleveland manager Lou Boudreau for letting loose a pair of five-foot boa constrictors.

In 1946, master showman and team owner Veeck had signed Price to a major league contract with his Indians. The idea was to use Price as a pre-game entertainer, but Price actually saw action that season. The team's starting shortstop, future Hall of Famer Boudreau, was also the team's manager and reluctantly tolerated Price's presence. On a spring training road trip in 1947, Price wore out his welcome thanks to his reptilian friends. As part of his act, Price would wrap snakes around himself while playing catch or batting. Among his many props, he carried 20 snakes with him when he traveled with the team. On March 26, while the team rode their train just outside San Diego, Price unleashed two of the snakes after goading from teammates. Unfortunately, also on the train at the time was a group of female bowlers, on their way back from a tournament. In short time, several of the women created a scene when they saw the snakes, which resulted in the conductor halting the train on the tracks. When Boudreau learned of the incident, he ordered Price and his snakes off the train. It was the last time Price appeared with the club.

During the 1940s and 1950s, Price entertained fans throughout the major and minor leagues, charging $500/game in MLB, $300/game in the PCL, $200 in Class A and $125 in Class D. He usually averaged about 40,000 miles in a year, mostly be car. He packed the majority of his work into the three-month baseball season, often traveling to such places as Canada and Cuba. He was one of two clown coaches for Bill Veeck's 1947 Indians (the other was Max Patkin).

He starred in a film short, Diamond Demon, which was released in 1947. In the film, Price performed his standard tricks. Buoyed by the popularity of his short film, Price enjoyed success in the 1950s, traveling as far as the Caribbean to perform his acts, before retiring in 1959.

He resided in San Francisco, CA for the last seven years of his life and was a bartender at the J and J bar in San Francisco, maintaining his flashy image (Price was famous for his colorful dress shirts and ties). Having suffered from depression for the last few years of his life, while intoxicated (his blood-alcohol level was .028), Price attached a leather belt to a light fixture, then wrapped the belt around his neck and hanged himself. He died at age 54 from suicide in San Francisco on October 2, 1967. He was cremated and is interred at Golden Gate National Cemetery in San Bruno, CA (SECTION Z SITE 1929-A). He was survived by his wife, Martha.