Al Schacht, although he had a three-year career in the major leagues, became much better known after his playing days as the "Clown Prince of Baseball". He became a baseball clown (there were a number of such entertainers in the first part of the 20th century), and performed mostly at minor league parks as well as at all the major league parks.

The coach at his high school thought Al was too small to pitch, so he went to play in the sandlots instead. He later returned to the school baseball team but was banned by the Board of Education for his appearance on semipro teams. This led him to drop out of school.

Signing with a semipro team in Walton, NY, Schacht was with the club in 1910 and 1911. After one fine outing against the Cuban Stars and Jose Mendez witnessed by scout Mike Kahoe, Al got a wire from Clark Griffith requesting his presence. Griffith was unimpressed by Schacht's size (Al had worn extra clothing during the Mendez game to make himself appear larger) and offered to send him to the Fort Wayne, IN club in the Central League but Schacht turned it down and returned to the semipro game.

Erie Sailors manager Billy Gilbert signed him in 1912 but again let him go due to concerns about his weight and he moved to the Cleveland, OH team in the United States League (the forerunner of the Federal League). Al went 5-0 before the league folded. He then returned to semipro baseball once more. That year, Schacht faced Cy Young and beat the Hall-of-Famer in one outing.

Schacht began working as a boxing trainer that year and lost his father to illness. He got an offer from the 1913 Newark Indians and joined them, going 4-6 as the low man on a staff that was 91-51 when other pitchers got the decision. Al was offered a contract by the St. Louis Terriers to go to the Federal League but turned it down when Newark's Ed Barrow convinced him that he would get a job in the majors for Schacht. Al spent all of 1914 in Newark, though, posting a 12-10 record that was second on the team behind Cliff Curtis. In 1915, Newark moved to Harrisburg, PA and became the Harrisburg Senators during the season. For Newark-Harrisburg, Al was 13-13, again second on the team (this time behind Johnny Enzmann. Schacht slipped to 2-6, 4.45 with Newark in 1916 and had a 1.64 WHIP. He was plagued by a sore arm and was let go by the Indians. John McGraw signed him for the New York Giants, but he never pitched for them.

Al spent the early part of 1918 working for Bethlehem Steel Company, then was drafted into the US Army despite a hearing deficiency which he thought would exclude him from service. He spent the next year stateside and played baseball throughout the time.

Returning to the International League for a 6th year there, Al went 19-17 for a horrible Jersey City team that otherwise was 37-76. He led the IL with nine shutouts and his 1.95 ERA was 4th-best in the league. He threw 318 innings and walked only 59 batters that year. Al kept anonymously sending Clark Griffith news clippings of his successes to try to get a chance at the major leagues. Griffith scouted Schacht and liked what he saw, signing him up.

Al went 2-0 with a 2.40 ERA in two late starts for the Senators in 1919. In 1920, Al was 6-4 with a save and a 4.44 ERA. When Walter Johnson was unable to make a scheduled start due to injury, Schacht took the turn when none of the other hurlers volunteered and got the win in front of a crowd that had been angry not to see The Big Train. Al broke his shoulder that year when Detroit SS Donie Bush crashed on him after leaping to make a play.

Al began working with Nick Altrock in a clowning act during his Washington days but the two did not get along in terms of personality. Al also took turns working the third base coaching box. Schacht went 6-6 with a save and 4.90 ERA for the Sens in 1921 to conclude his big-league pitching career.

In his major league days, he had a record of 14-10 in 197 innings, with an ERA of 4.48. According to the similarity scores method, the most similar player to Schacht was his teammate Jose Acosta. Schacht liked to boast that Babe Ruth never homered against him.

At age 29 and with a history of injuries, Schacht got a job with the 1922 Reading Aces. He went 5-6 with a 3.20 ERA for Reading, second on the team behind only player-manager Chief Bender in ERA. Spencer Abbott replaced Bender as manager in 1923 and did not like Al's antics, letting him go after two games. Schacht then moved to the Binghamton Triplets and went 9-4 in his last year as a regular pitcher, while also coaching. His clowning was very popular in Binghamton. He finished up his playing career with the 1924 New Haven Profs but was primarily a coach and clown there.

Schacht re-joined the Senators as a third base coach in 1925 and remained there for a decade. He continued his act with Altrock during this time. A popular fellow, his Clown Prince act didn't prevent him from serving as interim manager for the Senators in 1934. (Note: this service is not listed in reference works as it was unofficial, but it is described by the SABR Biography as occurring during a time when Joe Cronin had broken his wrist and went on honeymoon.) Cronin and Schacht were traded to the Boston Red Sox after that season for Lyn Lary and $225,000 and the Altrock/Schacht partnership ended. Al coached for Boston for two years, in 1935 and 1936.

The rest of his life[edit] 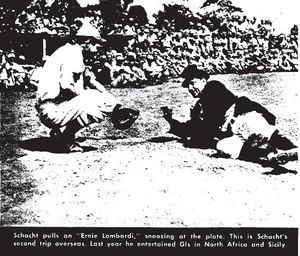 Schacht in New Guinea during WW2

Schacht continued to perform after his coaching career ended. He entertained at 25 World Series from 1927 to 1952, 18 All-Star Games, performed for the USO in World War II in Europe, Asia and Africa and in numerous other baseball games. He claimed that more people had seen him perform than any previous major league player. Among his acts were mock weddings at home plate, shadowing the third baseman, reading newspapers while sitting on the basepaths and imitations.

He ran a restaurant in New York City after World War II. In 1955, he published his autobiography, My Own Particular Screwball and he wrote three other books, including Clowning Through Baseball.

"There is talk that I am Jewish - just because my father was Jewish, my mother was Jewish, I speak Yiddish and once studied to be a rabbi and a cantor. Well, that's how rumors get started."