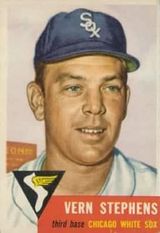 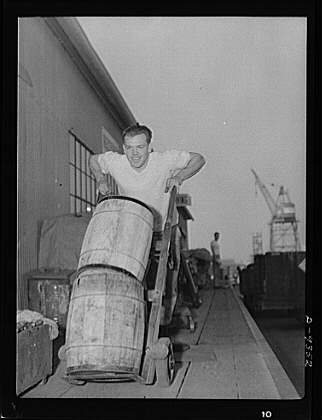 Vern working at a shipyard during World War II

One of the great St. Louis Browns stars near the end of the team's existence, Vern Stephens was a bona fide major league star during his prime years, putting up incredible offensive numbers. An eight-time All-Star, he was in the top five in the MVP voting three times. He was a member of the only Browns team to play in the World Series, in 1944. Stephens racked up between 137 and 159 RBI three times - an amazing feat for his 155-game seasons.

Despite his awesome offensive stats and above average range in the field, he never made it to the Hall of Fame. Stephens was the subject of a long article in one Bill James' books The Politics of Glory, where he is compared to contemporary Phil Rizzuto: the two could not have been more different as players, but Stephens was arguably better, although Rizzuto was the subject of a successful campaign to get him into the Hall of Fame; Stephens died young and no one lobbied on his behalf. James pointed out that Stephens was a shortstop who, after playing a decade, had posted offensive numbers that were equaled by only one contemporary during that period, Stan Musial. Based on the similarity scores method, the three most similar players (as of 2007) to Stephens were all Hall of Famers.

Stephens broke into the majors in 1941 playing his first seven seasons with the Browns, having outstanding seasons with them. However, he achieved his greatest fame with the Boston Red Sox from 1948-1952, posting mammoth RBI totals in his first three seasons with the team. Although some observers have had a tendency to minimize his Fenway Park stats, his performances in Boston merely reflected the dominance that he had shown in St. Louis. During his years with Boston, Ted Williams was the only teammate who was able to regularly out-perform him offensively.

Defensively, his range and fielding percentage were solid. However, he flunked his physical for the army due to an old knee injury, and another injury to the knee eventually caused him to move from shortstop to third base.

In 1946, he briefly jumped to the Mexican League, but was brought back after only a few days. Jack Fournier was one of the people who went down to get him. Other players who jumped and stayed longer were suspended by Major League Baseball, but Stephens continued to play in the majors.

Stephens died from a heart attack suffered while lifting a piece of machinery at the young age of 48 and was buried at Long Beach's Forest Lawn Memorial Park.

Stephens' biography reveals a number of interesting facts. Stephens played American Legion Baseball with Bob Lemon. Vern also played basketball and swam in high school, and attributed his upper body strength to all the swimming. He got good grades in high school.

He was in the minors from 1938-1941, leading a couple of leagues in RBI. Along with his knee injury, Stephens' eyesight was declining in the later years of his major league career. After his playing days he worked for several companies in sales and became a top amateur golfer.

He had a reputation as a drinker who liked the nightlife, but some think that the reputation was overblown and belies the fact that his supposed lifestyle didn't keep him from posting great numbers.

He holds the record for most RBI in a season by a shortstop: 159 in 1949. He led the American League in RBIs three times. Arguably, this is the most by a shortstop. Honus Wagner led the league five times, but two of these were as an outfielder.

Stephens holds the record for the longest gap between home runs in a single game. On May 30, 1951, he hit a three-run homer in the bottom of the 1st inning against the New York Yankees, giving the Red Sox a 3-0 lead. Fourteen innings later, in the bottom of the 15th, he hit a solo home run to break a 10-10 tie. Five players have had a thirteen-inning gap.