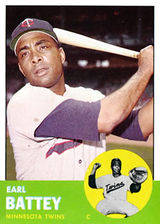 Earl Battey was a four-time American League All-Star and two-time Gold Glove winner. Between 1960-1965, he was one of the top catchers in the major leagues.

Battey reached the majors with the Chicago White Sox in 1955 and in five seasons saw limited playing time behind All-Star backstop Sherm Lollar. Prior to the 1960 season, he and Don Mincher were traded to the Washington Senators for Roy Sievers. He immediately became a regular behind the plate for the Senators and remained one for six more seasons after the club became the Minnesota Twins in 1961 Battey was a starter in both 1962 All-Star Games and, after suffering a broken cheekbone that season, wore a special helmet thereafter. He had his finest season in 1963, when he hit .285 with 26 home runs and 84 RBI. The 26 homers were a franchise record for a catcher which lasted until 2019, when it was surpassed by Mitch Garver.

In the 1965 World Series, he was the Twins' starting catcher for all seven games. In Game 3, he was injured when he ran into a crossbar while trying to catch a foul pop-up but, despite being able to barely speak or turn his head, he played in the four remaining games. Understandably, he did not hit well, going 3 for 25 with 1 triple and 2 RBI. Though he made his final All-Star appearance the next season, he was not the same player, and slid out of the big leagues at 32 following a rough 48 games where he batted .165 in 48 games.

After his playing career, he earned his degree from Bethune-Cookman College and became a high school teacher at Forest High School in [Ocala, FL]]. Battey died of cancer at age 68 in 2003. The following summer, he was inducted into the Minnesota Twins Hall of Fame.