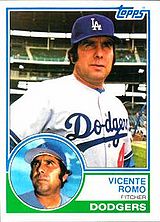 Romo also did a fine job in summer games, winning another 182 games in the Mexican League and 45 more in other leagues, for 409 wins counting his performance in winter leagues. 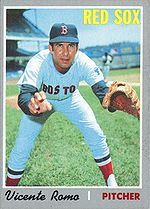 Romo was a coach for the Olmecas de Tabasco in 2011.

Vicente is the brother of Enrique Romo. The two had identical MLB totals in saves (52) and losses (33). The two were in the majors simultaneously in 1982, which was their last year in the big leagues.