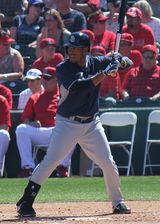 Infielder Yangervis Solarte made the majors in 2014. His uncle Ronny Cedeño has been a major leaguer.

Solarte made the Yankees' roster out of spring training in 2014, beating Eduardo Nunez out of a back-up infielder job. He made his debut in the team's second game of the season, pinch-hitting for 3B Kelly Johnson in the 7th inning with the Houston Astros ahead, 2-0, and runners on first and third with no out. Facing Kevin Chapman, he grounded into a double play, scoring one run but also killing the budding rally. He stayed in the game at third base and had another at-bat in the 9th, popping out to first base against Josh Fields to end the game as the Astros won, 3-1. He then made his first start the next day at 3B and had 3 hits and a walk, scored 2 runs and drove in 1 to lead New York to its first win of the year, 4-2 over Houston. His first MLB hit came off Brett Oberholtzer. When 1B Mark Teixeira went on the DL the next day, it gave Yangervis more opportunity to play, as 3B Johnson moved to first and he took over at the hot corner. He put up back-to-back two-hit games on April 4-5 for a red hot 7 for 13 start to his career. He continued to hit very well through the next couple of months while getting a lot of playing time. On June 8th, his average was still at .299, but he went through a dry stretch after that, hitting .073, even though he was still getting regular playing time as the starting third baseman. On July 3rd, he was hitting .260 with 6 homers and 30 RBIs in 71 games when he was sent down to the AAA Scranton/Wilkes-Barre RailRiders as the Yankees called up Zelous Wheeler to take his place. He hit an amazing .600 (12 for 20) in 5 games to earn a quick call-back. On July 22nd, he was traded to the San Diego Padres along with P Rafael De Paula in return for 3B Chase Headley. It was a move that showed that the Yankees were willing to make a postseason push, and that they considered that Solarte was a flash in the pan. He was at .254 in 75 games, having gone only 1 for 10 since his return from AAA. In his first game for the Padres on July 23rd, he went 2 for 4 in an 8-3 win over the Chicago Cubs, driving in a run with a 1st-inning triple and coming in to score on a sacrifice fly to set the tone for the Friars. He did well with San Diego, hitting .267 with 4 homers and 17 RBIs in 56 games.

Yangervis won a regular job with the Padres in 2015 playing 152 games as the team's principla third baseman, but also seeing time a t first base and second base. He hit .270 with good power, banging out 33 doubles and 14 homers, scoring 63 runs and driving in 63. The main flaw in his game was his lack of running speed, as he stole the first base of his career that season; fans jokingly called him "Slowarte", but it was affectionate as he was still one of the better offensive players on the team. Tragedy struck in 2016, however, as his wife Yuliette was afflicted with cancer and passed away on September 17th at the age of 31. The couple had three daughters. Still, after a brief mourning period, he returned to complete the season. In 109 games, he hit .286 with 15 homers and 71 RBIs as one of the Padres' offensive leaders. After the season, he was honored with the Tony Conigliaro Award in recognition of his courage in excelling on the field in spite of his difficult personal circumstances. He followed that seaon in 2017 by hitting .255 in 128 games with 18 homers and 64 RBIs. He played mostly second base that season (79 games), with over 20 games at shortstop and third base as well.

On January 6, 2018, he was traded to the Toronto Blue Jays in return for two minor leaguers, P Jared Carkuff and OF Edward Olivares. The Blue Jays were loading up on infielders, having acquired Aledmys Diaz and Gift Ngoepe earlier in the off-season, because of concerns over the health of SS Troy Tulowitzki and 2B Devon Travis. He was the hero of the Jays' first victory of the year on March 31st, as he homered off former teammate Dellin Betances of the Yankees to lead off the 8th inning, breaking a 3-3 tie and sending the team on its way to a 5-3 win. He had a memorable day on May 3rd, when he went 8 for 10 during a make-up doubleheader against the Cleveland Indians. The day did not get off so well, as in the 3rd inning of the opener, he took a bad tumble advancing from second to third base on a fly ball. He sustained a bad cut on his lip but stayed in the game, which turned out to be a good thing as e was nearly unstoppable. In the 11th inning, he redeemed an error that had allowed the Indians to tie the game earlier by belting a two-out grand slam off Tyler Olson, breaking a 9-9 tie as the Jays went on to win, 13-11. Then he homered again off Adam Plutko and added a double, finishing the day with 8 hits, 2 doubles, 2 homers, 4 runs and 7 RBIs.