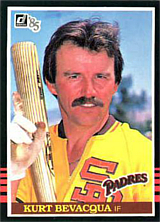 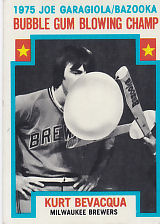 "I have never ever since I've managed ever told a pitcher to throw at anybody, nor will I ever. And if I ever did, I certainly wouldn't make him throw at a (BLANK)ing .130 hitter like [Joe] Lefebvre or (BLANK)ing [Kurt] Bevacqua, who couldn't hit water if he fell out of a (BLANK)ing boat. And I guaran-(BLANK)ing-tee you this, when I pitched, and I was going to pitch against a (BLANK)ing team that had guys on it like Bevacqua, I'd sent a (BLANK)ing limousine to get the (BLANK) to make sure he was in the mother (BLANK)ing lineup because I'd kick that (BLANK)'s (BLANK) any (BLANK)ing day of the week. He's a (BLANK)ing mother (BLANK)ing big mouth; I'll tell you that." - Tommy Lasorda, after Bevacqua alleged Lasorda ordered Los Angeles Dodgers reliever Tom Niedenfuer to hit Joe Lefebvre, in 1982.

His most frequent position was third base, but he was also used often at second base, first base and in the outfield, and at shortstop for a handful of games. He only played in over 100 games in a season twice in a 14-year career, with the Milwaukee Brewers in 1975 and with the Padres in 1979. That year, he set a personal high with 297 at-bats, the closest he would ever come to being a regular player.

Bevacqua became an unlikely hitting leader for the Padres in the 1984 World Series. The designated hitter rule was in effect that year as San Diego faced the Tigers; manager Dick Williams used Bevacqua in the role, despite hitting only .200 with a lone home run in 80 at-bats over the regular season, because he was the team's top pinch hitter. He responded by hitting .412 with 2 doubles and 2 homers, but the Padres were defeated in 5 games.

He was at the center of two brawls, one with the Detroit Tigers in spring training of 1981, precipitated when Howard Bailey hit Bill Robinson in the face with a pitch. The giant brawl between the Padres and Atlanta Braves on August 12, 1984 was called the worst thing he'd ever witnessed in baseball by umpire John McSherry. Bevacqua went up in the stands after getting hit in the head with a full can of beer.

In 1975, while a member of the Milwaukee Brewers, he was the "Bazooka Bubble Gum Blowing Champion". A baseball card in the 1976 Topps set, which shows him blowing an outsize bubble, commemorates this exploit.

Bevacqua, not in a speaking role, was featured on a May 1999 episode of FOX's King Of The Hill as a ringer brought in by Thatherton Fuels, the rival propane company to Hank Hill's Strickland Propane, for a softball game.