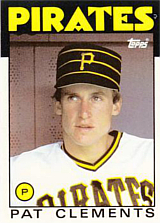 Pat Clements's was a veteran of eight big league seasons. He did his most work in his first, making 68 appearances between the California Angels and Pittsburgh Pirates in 1985 while finishing 5-2 with a 3.46 ERA. He was not much for missing bats, only striking out 36 men in 96 1/3 innings that season (and 158 in 360 1/3 career innings), and only crafted two more seasons with 50 plus appearances. After saving 7 games in 55 appearances for the 1988 New York Yankees, Pat finished his big league career with limited work for the San Diego Padres and Baltimore Orioles into 1992. Pat's high school coach was Mel Dalrymple, brother of big league catcher Clay Dalrymple. Clements was on Team USA that won Gold in the 1981 World Games.